August 19, 2020
On the occasion of Bastille Day 2020, two RAF Typhoons assigned to the 1(F) Squadron took part in the traditional flypast over Paris. One of them was flown by Capt. Rage, a French Air Force fighter pilot under the Pilot Exchange Program. Before the flight he gave an interview where he talked about his experience with a foreign air force and the transition between the Rafale aircraft and Typhoon.

"I am Captain Rage, I am the French Exchange Pilot on 1(F) Squadron and I am from the French Air Force. I have been a pilot since I was 14 then I joined the Air Force 15 years ago and I have flown fast-jets for about 10 years. I started as an instructor pilot on Alpha Jets for about 4 years then I moved to Rafale for about 6 years on the single seat version and then this Exchange for 2 years.

I have been deployed in Africa with the French Air Force with the Rafale and in the Middle East with the Typhoon and we have done the NATO Quick Reation Alert mission in Iceland recently.

I got involved in the exchange programme because I wanted to fly another jet in a foreign country. Working in a different language was initially challenging but now with time it becomes vey natural, especially fly day-to-day with my colleagues is like being a proper British person.

What I enjoy really is everyday when I takeoff with my jet and fly over the North Sea and just watch the amazing Scottish landscape. I have so many best moments but one in particolar would be in Iceland when we were all together as a strong team with 1(F) Squadron in a remote place, seeing the glacers in such a nice place.

Operating with French or the British is very similar because we have the same commitment and we deploy to the same sort f places. I wouldn’t say we have big differnces between our Air Forces and this is what make it easy to interoperate.

I’ve been here for over 2 years, and I have one year left then who knows what the future will be for me – hopefully flying!

People will celebrate Bastille Day watching the flypast on the TV or taking part in the local ceremonies in their own town. Back at home to celebrate Bastille Day. I will be, as a service person, doing the ceremony but hopefully I will be doing the flypast in the Rafales. I have been lucky to do the flypast over Paris in the Rafale a few years ago. Taking part in the Bastille Day flypast in a British jet is really amazing, I am really proud to do that. But I am really proud to represent the Royal Air Force and to represet 1(F) Squadron." 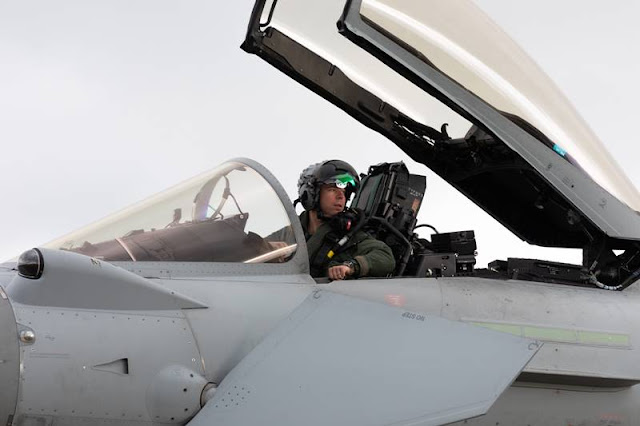 The Pilot Exchange Program provides for the exchange of experiences between the air forces of allied countries that have joined the initiative. Under this program, pilots learn to fly aircraft of other nations and of different types from those in which they are already qualified, as in the case of the Italian Air Force pilot who flew USAF A-10.
Source: Video-Interview published by RAF 1(F) Squadron
Images: RAF Lossiemouth Media and Comms (Via Joris van Boven/Alex van Noye)
Eurofighter Pilots Exchange RAF