November 27, 2020
On 12 August 2020, the Aeronautica Militare (Italian Air Force) deployed its Tornado fighter bombers at the Ali Al Jaber air base, Kuwait, to replace the Italian Eurofigthers belonging to the Typhoon Task Group. Under Operation Inherent Resolve, Tornados belonging to the Task Group Devil/Task Force Air Kuwait have recently reached and exceeded the 500 flight hours milestone in just 100 mission days.
Task Group Devil returned to Kuwait just over five years after the previous mission there and includes personnel from the 6th Wing of the Italian Air Force, as well as colleagues from other Wings and bodies.

Despite the peculiar climatic conditions - during the summer months the temperatures can exceed 50° C - the Italian aircraft have carried out a large number of missions for about 1400 points of interest covered.

The Tornados are mainly carrying out Intelligence, Surveillance and Reconnaissance (ISR) missions to monitor the operational theater in support of the Coalition. This type of mission is essential to obtain the Information Superiority which is decisive in all military operations.
The armed forces of the countries that have joined the Coalition are operating in accordance with Art. 51 of the UN Charter, as well as Resolutions no. 2170 (15 August 2014) and n. 2178 (27 September 2014), based on the request for support sent on 20 September 2014 by the Permanent Representative of Iraq to the UN to the President of the Security Council.

After the fall of the Islamic state in March 2018, the threat today is mainly constituted by the Daesh cells trying to re-emerge. 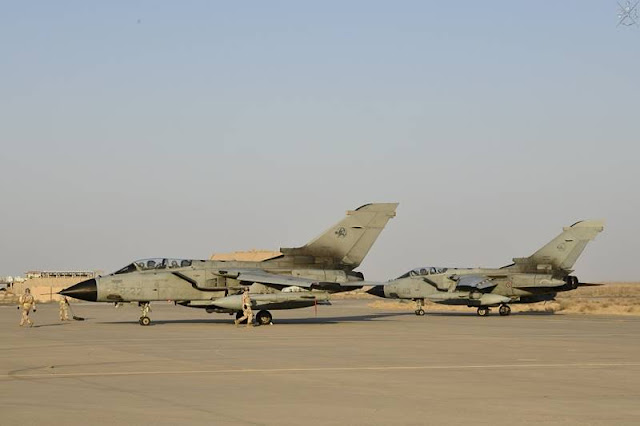 POIs (Points of Interest) are preliminarily studied and analyzed by analysts who collaborate in mission planning to identify the optimal flight path for the Reccelite II reconnaissance POD. This POD represents a real electronic eye mounted under the aircraft, to acquire the most suitable images and with the best possible quality. The Reccelite II is an excellent latest generation electro-optical reconnaissance POD that allows an accurate collection of images from medium and high altitudes, both day and night.

The data collected by the aircraft are analyzed, interpreted, enriched and enhanced thanks to the skilful work of the staff of the Italian Integrated Multisensor Exploitation I2MEC Cell which belongs to the Italian National Contingent Command Air.

The data is then transformed into "information products" of various types and provided to the "Coalition of the Willing" which is the group of nations that initiated the Inherent Resolve operation against the DAESH terrorists in Iraq and Syria.
👉 You may also like: Italian Typhoon proved to be a worthy substitute for Tornado, AMX fighter bombers in Kuwait
Written by Matteo Sanzani
Source, Images: Italian Air Force
Italian Air Force Operation Inherent Resolve