NAHEMA acted as the Contracting Authority on behalf of German Bundeswehr.

NHIndustries and NAHEMA, on behalf of the Federal Office for Equipment, Information Technology and In-Service Support of the German Armed Forces (BAAINBw) signed the contract for the acquisition of the helicopters, related support services and training on November 26th, 2020.

The Sea Tiger will represent the German configuration of the NH90 NFH helicopter and will be employed for the German Navy’s advanced shipborne operations from 2025. The helicopters will replace the elderly Sea Lynx Mk88A fleet, which entered into service in the 80s; it represent a further confirmation of the choice already made by the German Armed Forces to operate NH90 as onshore and offshore tactical troop and naval transport helicopter.

"The new sensors on board provide a substantial increase in the helicopter’s mission capabilities and clearly position the NH90 as one of the world’s most advanced ASuW/ASW platform for shipborne operations in challenging maritime conditions." said Giorgio Gomma, General Manager of the NATO Helicopter Management Agency (NAHEMA). “This latest configuration concentrates the excellence of the European industry and set the ground for the future naval NH90s. We are proud to be part of the evolution of the European Defence Forces.” was commonly shared by Nathalie Tarnaud-Laude, President and Claudio Nittoli, Managing Director of NHIndustries.

Moreover, the use of the same NH90 platform by the German Army (NH90 TTH) and by the German Navy (NH90 NFH) will enable extensive synergies in terms of support, logistics and training.

NH90 is well suited for operations in the most demanding conditions and has been combat-proven in many theatres of operation worldwide. To date, 100 naval NH90 helicopters have already been delivered to six nations and have completed over 70,000 flight hours in search and rescue, coastguard, antidrug, humanitarian, and military operations. 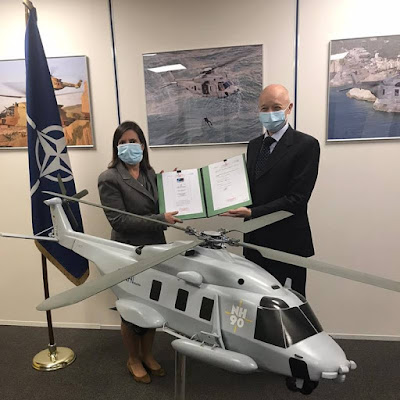