On 30 August, a fighter detachment of the German Air Force took over the augmenting role for Baltic Air Policing at Ämari Air Base, Estonia. During a ceremony, the responsibilities for the mission were handed over to the German Airmen from the French Air Force which had been conducting the mission since May.

The ceremony was attended by high ranking civilian and military guests, amongst them Kristjan Prikk, Permanent Secretary of the Estonian Ministry of Defence. As NATO representative Brigadier General Roberto Di Marco, Deputy Commander of the Deployable Air Command and Control Centre, attended the ceremony on behalf of General Tod Wolters, Commander of NATO’s Allied Air Command.

"We are united and resolute to protect all our Allies” Brigadier General Di Marco said in his speech. "We will continue to perform the peacetime mission of Baltic Air Policing, sending a message of Allied unity, solidarity and resolve to the three Baltic States – You can rely on NATO” he added. 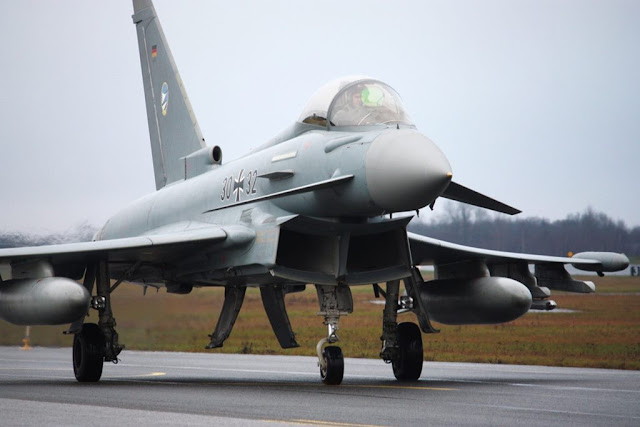 Like during their last rotation at Amari in 2017, the German Air Force is going to augment the mission for two rotations in a row, staying in Estonia with their Typhoon jets and approximately 160 personnel until April 2019. The lead role of the mission will be handed over from the Portuguese to the Belgian Air Force at Šiauliai Air Base, Lithuania on Friday, 31 August.

Baltic Air Policing is a regional form of NATO’s peacetime Air Policing which responds to any aircraft flying inside or approaching NATO airspace without complying to international flight regulations. Baltic Air Policing was established in 2004 when Lithuania, Latvia and Estonia joined the Alliance. Since 2014 a second detachment has been augmenting the mission out of Ämari, Estonia. As the three Baltic States don’t have Air Policing assets of their own, other Allies step in to ensure the same single standard of airspace safety and security all over NATO. In the 14 year successful history of the mission, 17 Allies have contributed to the mission.