The Italian Ministry of Defense and the Sardinian authorities, with the cooperation of the Italian aerospace company Leonardo, are evaluating the opportunity to locate the International Flight Training School at Decimomannu AFB.

Italian Minister of Defense, ElisabettaTrenta, and the President of Sardinia, Francesco Pigliaru, met over the last few days to discuss about the opportunity to locate the International Flight Training School (IFTS) at the Decimomannu airport. The IFTS is the result of an agreement signed between Leonardo's Chief Executive Officer, Alessandro Profumo, and the Chief of Staff of the Italian Air Force, Gen. Enzo Vecciarelli, during the Farnborough International Air Show 2018, UK, on July 17 (More details here).


Trenta and Pigliaru have both said that they are in favor of locating the IFTS at the Sardinian airport: according to the armed force this solution could benefit from the high efficiency of the air base and from the advanced shooting range located in the area, while for the regional authority it would be a opportunity to revive local activity and to heal the crisis that hit the area following the departure of the German Air Force.

The project was also welcomed by the local authorities thanks to the job opportunities that the IFTS would guarantee to the local population: after an initial investment of about 40 million euros to upgrade the airport’s infrastructure, the project would guarantee jobs for over 200 qualified civilian employees. In addition, the high value of the planned activities would create the basis for an high-tech employment. The initiative is also in synergy and complementary with the other activities carried out by the Aerospace District of Sardinia.

The IFTS will have a capacity of 20 courses for Italian pilots and 60 courses for foreign pilots and will be able to guarantee full satisfaction of the training demand of the armed forces from all around the world thanks to the skills of the Italian Air Force in military pilot training.

The IFTS is based on the solid, highly consolidated results achieved over the years by Italian Air Force and Leonardo in the military training: the flight school of the 61st Wing in Galatina, south of Italy, has trained students from several nations destined to fourth and fifth generation aircraft such as Eurofighter and F-35. The advanced training system adopted by the 61st Wing is based on the modern M-346 trainer jet, made by Leonardo, and the related flight simulator developed by CAE. The simulator features the Leonardo's LVC technology (Live, Virtual and Constructive Simulation) that allows students to interact with other pilots in flight during the same training session. In addition, it is able to faithfully reproduce all phases of the flight. 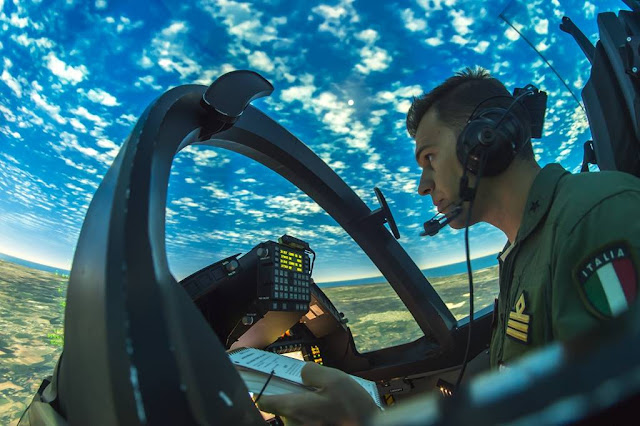 The data confirm the effectiveness of the project: the 61st Wing trained several pilots and flight instructors from the United States, Spain, France, Austria, the Netherlands, Poland, Singapore, Argentina, Greece and Kuwait, while more and more nations rely on the M-346 for the training of their fighter pilots. Leonardo has already sold a total of 72 aircraft to Italy, Israel, Singapore and Poland.