More than 20 ships, led by British flagship HMS Ocean, and over 300 British, Greek and US Marines stormed Crete for the Hellenic Navy’s main autumn war games.

The Greeks host Exercise Niriis to test a sizeable international naval force and its ability to respond to a major crisis in the region.

The 2017 incarnation of Niriis involved ships/aircraft/personnel from Greece, Italy, Bulgaria, Israel, the USA and the UK.

As part of a fictitious UN force they had to conduct boarding operations, deter and interdict illegal activity at sea, building up to an amphibious assault which paved the way for a safe extraction of civilians from Cretan soil.

Greek, Royal and US Marines were embedded in each other’s units as they carried out combined reconnaissance patrols and raids leading up to the final main effort.

The Royal Marines of Bravo Company, 40 Commando, normally based at Norton Manor camp near Taunton, made extensive use of the Commando Helicopter Force assets, which shifted base from HMS Ocean to Maleme airfield on Crete’s northwest coast.

There the green berets rapid roped repeatedly from both Wildcats and Merlins – more than 500 descents successfully performed by the 93 men of Bravo Company without a single injury. 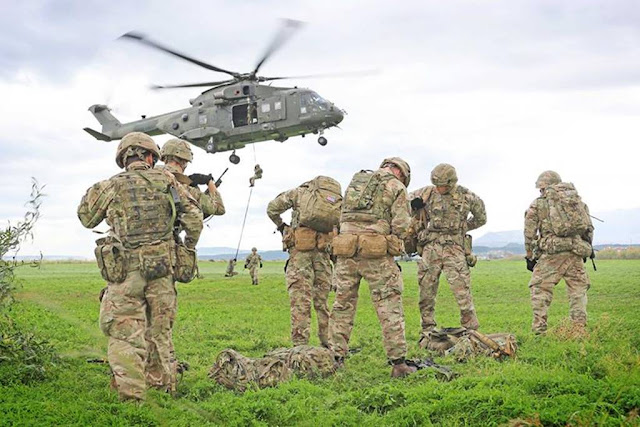 When Niriis kicked in, the Merlin Mk3 was committed on low-altitude troop insertions and extractions, as well as being held at readiness for medical evacuations.

And the Wildcat proved invaluable in conducting intelligence, reconnaissance and surveillance missions – one of the most comprehensive tests for the battlefield variant of the helicopter, with the added pressure on one sortie of carrying the land forces commander for the exercise who joined the 847 NAS helicopter for a bird’s eye view of the exercise.