US, UK, SOUTH KOREAN TOGETHER FOR INVINCIBLE SHIELD EXERCISE

November 14, 2016
The Royal Air Force operated its largest deployment of equipment and personnel to the Korean Peninsula since the 1950s during Invincible Shield, a combined interoperability exchange, which is taking place Nov. 1-10. 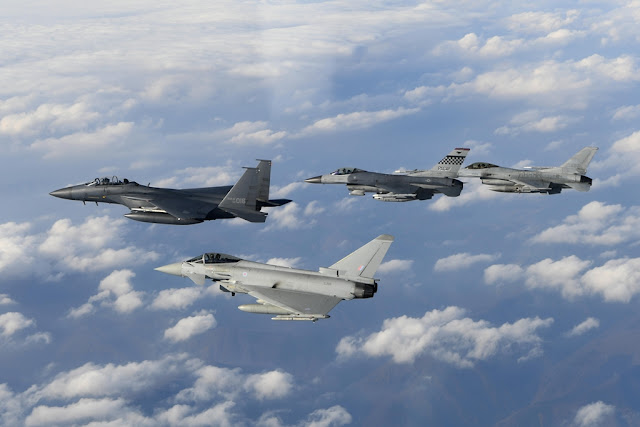 The RAF sent multiple Eurofighter Typhoon FRG4s to Osan Air Base, flown alongside U.S. F-16 Fighting Falcons and A-10 Thunderbolt IIs, and South Korean air force F-15K Slam Eagles in multiple sorties throughout the exchange, which marked the largest RAF gathering in South Korea since the end of the Korean War.
“I expect Invincible Shield, our first (South Korea) – U.S. – United Kingdom combined-air exercise, to not only enhance the combined air operations capability to protect peace and stability on the Korean Peninsula, but also greatly contribute to the improvement of military operation with the Royal Air Force,” said Lt. Gen. Won, In-Choul, the South Korean Air Force Operations Command commander.
The exchange provided an opportunity for the three nations to share information and skills acquired throughout decades of historic combined aerial experience in different theaters across the globe.
“Working shoulder to shoulder, we are showing a unified front to those who would wish to do us harm,” said Lt. Gen. Thomas W. Bergeson, the Seventh Air Force commander.
The RAF personnel seemed appreciative of the opportunity to not only train alongside the U.S. and South Korean air forces, but also continue to strengthen their decades-old relationship with South Korea.
“I know from speaking with those that have been participating in the exercise the success it has been so far, enhancing the interoperability between our air forces and strengthening our mutual interest in security and defense,” said Air Chief Marshal Sir Stephen Hillier, the RAF chief of air staff. “The RAF participants have also told me what a privilege they have felt it to be to exercise so closely with our Korean partners and friends, alongside U.S. forces, on Invincible Shield.”