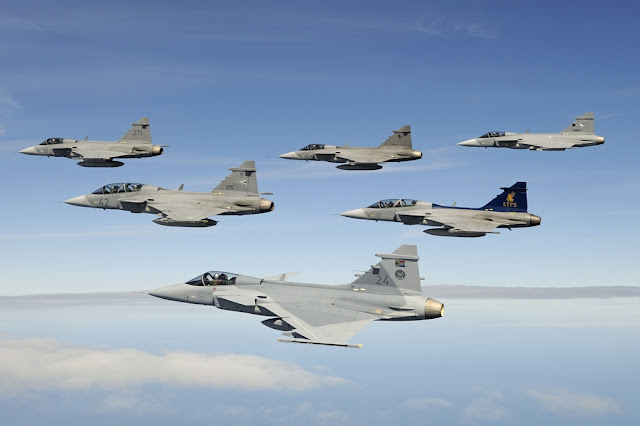 Gripen was the first of the new generation fighter aircraft to enter service. Saab have created and produced a cost-effective, tailor-made, top-of-the-line aircraft on time and within budget.

Gripen has received many positive responses from the commanders of the air force who currently use the aircraft. 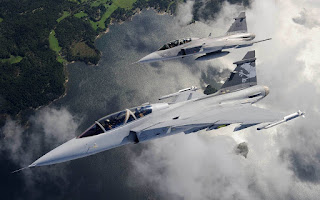 “The Gripen fighter gives us the strategic, operational and tactical flexibility that we need in an ever changing world. In the strategic tier, the Gripen provides the decision makers with flexibility to change its operational capabilities over time through an ever ongoing step-by-step development.
In the operational tier the Gripen provides the commanders with a multirole flexibility to perform a wide range of tasks during the same mission. In the tactical tier it provides the Air Force men and women with agility and manoeuvrability in every task. In that world of demands in all tiers, the Gripen concept provides control over the costs and ever improving development of the capabilities a long time into the future. In addition, it is a beautiful work of art.” 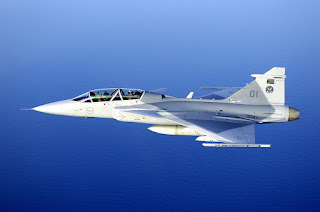 “Gripen will be one of the crown jewels in the technological rejuvenation of the South African Air Force. It provides even more opportunities for South African citizens to serve their country while being skilled in leading edge technologies”.

The first South African Gripen aircraft successfully delivered to customer in April 2008.
South Africa-specific Gripen flight test programme successfully completed at the Gripen Flight Test Centre, AFB Overberg in the Southern Cape. Assembly of aircraft ongoing at Saab. During the FIFA World Cup 2010, South African Gripens detected and intercepted a number of potential aerial threats and succesfully guarded the skies around the clock during the event. The Gripens provided radar intelligence to the ground controllers, data link information to other participating aircraft and constituted the last line of defence against any airborne threat. 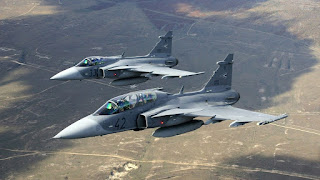 “The Gripen system is now the back-bone of the Hungarian Air Force, protecting air sovereignty and performing NATO missions. We are proud that the Hungarian Air Force is operating one of the most advanced combat aircraft in the world. Gripen exceeds our expectations in every area and we look forward to continued Gripen missions at home and in a coalition mission well into the future.”

HuAF have received all 14 Gripen (12 Gripen C single-seaters and 2 Gripen D two-seaters) as agreed in December 2001 between Hungary and Sweden to lease Gripen aircraft. On 3 February 2003, MoD Hungary and FMV Sweden amended the contract to a lease/purchase arrangement.
Training of the first 5 Hungarian Gripen pilots commenced in Sweden in January 2005.
The second group of 5 pilots concluded their training in December 2006. Training of all technicians/
ground crew completed March 2007. 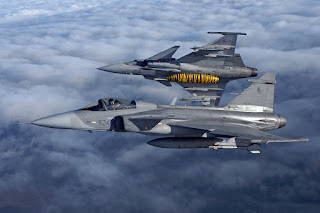 “I honestly must say that after my five-year great experience with the operation of the Gripen fighter and, simultaneously, with the Swedish highly professional approach and support, I hope that this co-operation will remain unaffected in the future.”

A formal agreement for 10 lease years was signed between Czech MoD and Swedish FMV in June 2014 for 14 Gripen (12 Gripen C single-seaters and 2 Gripen D two-seaters).
The Gripen offset agreement with the Czech Republic includes direct offset equalling 20% of the total value to support and develop the Czech aerospace and defence industry. 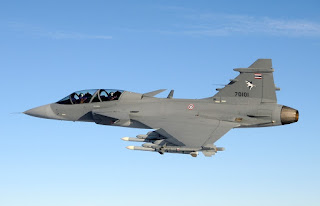 “The arrival of the six Gripen aircraft at Wing Six Surat Thani is the introduction to the new generation of the advanced air defence technology in Thailand. What we are witnessing today is the gateway to achieve the goal of becoming One of the best air forces in Asia. Once the Gripen and the
Saab 340 Erieye aircraft are operational at their full performance, we will successfully accomplish the netwotk centric operation in the near future. I would like to extend my sincere appreciation toward the Thai and Swedish personnel who have taken part in the accomplishment of this program.”

In fierce competition with American and Russian fighters, the Gripen fighter was selected by the Royal Thai Air Force (RTAF) in 2008. The new Thai Gripen fighter will be supported by Saab’s Erieye Airborne Early Warning system (AEW) and a dedicated Command and Control System (C2), also provided by Saab. The RTAF has ordered 12 Gripen C/Ds to replace F-5 Fighter jet, two Saab 340 Erieye AEW Aircraft and one Saab 340B for training and transport duties.
The first Saab 340 Erieye AEW and Saab 340 were delivered in 2010 while the first batch of six Gripen was handed over in early 2011. The multi-role Gripen fighters are based at Wing 7 in Surat Thani, the only intercept jet fighter squadron in southern Thailand.
The first RTAF Thai fighter pilots and technical ground crew were trained in Sweden, just like their colleagues from Sweden, the Czech Republic and Hungary.

Surely the advantage of Gripen compared to its main European competitors (Rafale and Eurofighter), is a combination of advanced technology at a very competitive price. Currently the aircraft is under evaluation by several air forces who intend to purchase new aircraft for the future.