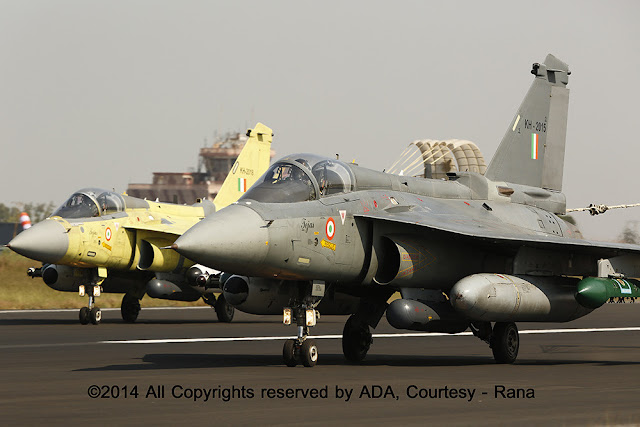 The India’s Defence Acquisition Council (DAC) signed a deal for 83 Tejas Mk-1A fighter jets.
The light fighter will be operated by the Indian air force and will replace the outdated Mig-21bis.

The DAC decision brings the total number of Tejas fighters ordered to 123 examples. The first batch of 20 Initial Operational Clearance (IOC) aircraft were ordered in 2006, a further order for 20 Final Operational Clearance (FOC) aircraft was placed in 2010.
Only two aircraft in IOC standard have been delivered to the air force. A third is expected to join before the end of the year.
HAL Chairman, T Suvarna Raju has said that the company plans to boost Tejas production capacity from eight to sixteen aircraft annually by 2018.
A Tejas squadron will have 20 aircraft, and deliveries of IOC standard aircraft will be completed in 2019.
IOC standard Tejas aircraft are armed with the Russian R-73 air-to-air missile (AAM), laser guided munitions, dumb bombs, rockets and a GSh-23 cannon. The Israeli Elbit helmet mounted display and sight (HMDS) is understood to have been fully integrated, as has the Rafael LITENING airborne targeting and navigation pod.
The Rafael Derby beyond visual range air-to-air missile will be made available on the FOC standard aircraft.
The Tejas Mk-1A will feature major improvements such as an Israeli Elta 2052 AESA radar, pod mounted Electronic Warfare (EW) suite, Cobham in-flight refueling probe along with numerous other improvements. Additional AAMs and precision munitions are also being considered by Aeronautical Development Agency (AGA).
Early plans had called for the Tejas to replace India’s Mikoyan MiG-21s and MiG-27s. The air force was to have inducted eight Tejas squadrons into squadron service between 2012 and 2022.
New Delhi’s is now exploring the possibility of acquiring another single-engine fighter to complement the Tejas.
The DAC meeting also approved the acquisition of 15 HAL Light Combat Helicopters (LCH). Ten will go to the air force, five to the army.