RAF MILDENHALL WILL BE CLOSE IN 2021 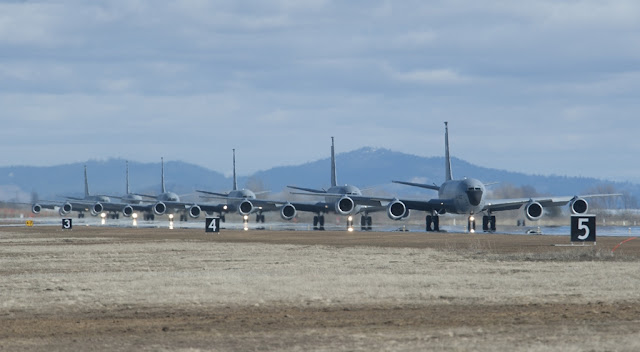 RAF Mildenhall will close as part of sweeping European reorganisations, the US Defense Secretary has confirmed about two years ago.
Operations at the USAF base, home to 3,200 military personnel, will be moved to other locations including Germany.
In Germany, both Ramstein and Spangdahlem air bases will gain personnel and aircraft.
Ramstein, already host to one of the busiest airfields in the U.S. Air Force, will take on the air-to-air refueling mission, with plans to move 15 KC-135 Stratotankers and about 700 personnel from the 100th Air Refueling Wing at Mildenhall to the Kaiserslautern-area base, said Maj. Mike Andrews, a USAFE-AFAFRICA spokesman.
The special operations mission will go to Spangdahlem, where about 10 CV-22 Ospreys and 10 MC-130J aircraft and associated personnel from the 352nd Special Operations Group at Mildenhall will relocate, USAFE officials said.
"The U.K. remains an essential location for forward-based and ready forces," Gen. Frank Gorenc, U.S. Air Forces in Europe and Air Forces Africa commander, said in a release. "Our close relationship with the U.K. government and integrated missions with U.K. forces remain integral to USAFE's ability to execute successful missions in support of our NATO Allies."
Headquarters USAFE-UK will move from Mildenhall to Lakenheath, and divesting 3,200 people from Mildenhall will be offset by the addition of 1,200 personnel at Lakenheath, the release said.
According to the first statements of the US Department of Defense the transfer would be complete by 2020.
But at a meeting between councils, businesses, colleges and government officials, the US Air Force (USAF) explained no changes in personnel numbers will take place until 2019, and any handover is unlikely before 2021-22.
The Air Force estimates it will save $125 million annually, primarily in infrastructure maintenance costs and facility upgrades, USAFE said.