by Blog Before Flight Staff on December 10, 2020
The 2021 air show schedule for the Air Force’s F-35A Lightning II Demonstration Team has been officially released.
The Utah-based team is scheduled to display the capabilities of the F-35A at approximately 22 performances starting in April 2021 and running through December. The final date is the most surprising as it will be held in RAF Lakenheath, UK. It is probably connected with the arrival of the first F-35As which will be permanently based there.

This will be the team's third year as an official aerial demonstration team, and it's second year operating as part of the 388th Fighter Wing out of Hill AFB, Utah, under Air Combat Command.

Capt. Kristin "BEO" Wolfe will continue to lead the team as it's demonstration pilot and commander, with the team continuing to practice locally over Hill Air Force Base during the air show "off-season", from January to March 2021.

The approximately 18-minute long profile will highlight the F-35A’s numerous capabilities to include speed, agility, and high-g turning, while the team will provide opportunities for people around the world to see the skill and professionalism of America’s Airmen. 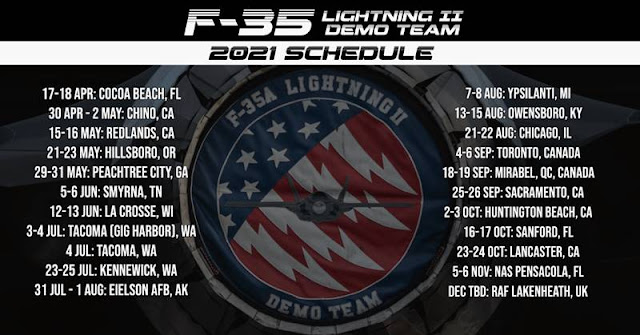