On 29 December 2020, the presidency of Ukraine announced the signing of a Memorandum between the Ministry of Defense and Antonov State Enterprise on cooperation in the manufacture of the An-178 aircraft for the needs of the Ukrainian Armed Forces.

In the first phase, the armed forces will receive three new transport aircraft. They can be used for the delivery of personnel, weapons and light military equipment by landing and parachute methods, as well as for the transport of goods.
"These new aircraft will be built by Ukrainian citizens, from Ukrainian components, for Ukrainian interests. In fact, this is how it should be,” the President of Ukraine Volodymyr Zelenskyy said before the signing ceremony, which took place at the Antonov State Enterprise.

"But at the same time, and this is logical, they always ask me whether these planes have been adopted in Ukraine? That is why this step is doubly important. It strengthens Ukraine's defense capabilities and helps attract Ukrainian and foreign investments,” the President said. 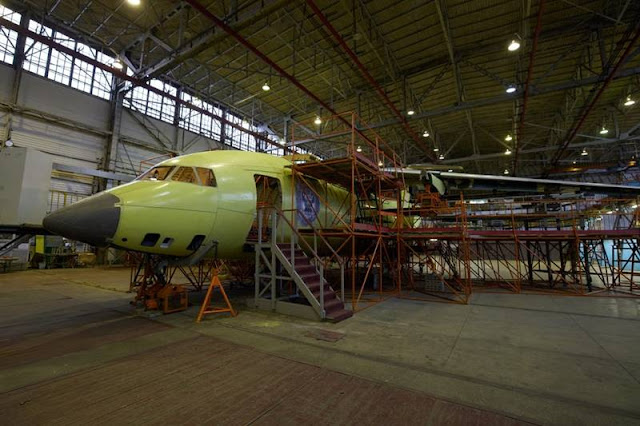 The Head of State also stressed that in the future such state orders should become not a sensation, but a normal practice. Therefore, in the near future he expects a full-fledged comprehensive plan from the management of SE "Antonov" to restore and reinforce the human resources of the company, return lost professionals and attract new ones.

The President invited state customers to continue working on new contracts for the production of the An-178 next year. He also urged the government to work on the establishment of a Ukrainian airline in 2021, which will use Antonov aircraft. The President commissioned to develop the state scientific and technical program on development of the aviation industry for 2021-2030 and to prepare the corresponding meeting of NSDC of Ukraine.

"Let's do everything possible for the aviation industry of Ukraine to overcome all zones of turbulence and reach new heights," Volodymyr Zelenskyy summed up.
ABOUT AN-178
The Antonov An-178 is a short/medium range military transport aircraft based on the regional An-158 (An-148-200). The main difference with the civil variant is the rear loading ramp.

The An-178 is capable of operating even from semi-prepared runways and can carry loads up to 18 tons with a maximum speed of 800 km/h. The military variant can carry up to 90 soldiers or 84 paratroopers, while the MedEvac variant can accommodate up to 40 stretchers and 38 seats.

The aircraft was initially developed to replace the old An-12/26/32 of the Russian Air Forces, however, due to the current crisis between Moscow and Kiev, the Ukrainian firm had to look for new commercial partners and proceed with the replacement of all Made in Russia components.

Peru is currently the only foreign customer for the An-178 with just one aircraft on order.

Antonov hopes to increase sales of the type in Ukraine in order to recover from its current economic crisis. Last year the Ukrainian National Guard issued a letter of intent for 13 aircraft.
Written by Matteo Sanzani
Photo Credit: Presidential Office of Ukraine
Industry