The Italian Air Force and Leonardo are close to opening a new flight school in the Mediterranean capable of training pilots from all over the world for the most advanced combat aircraft thanks to skilled personnel and the use of the most modern technology currently on the market.
Now based at the Italian Air Force' 61st Wing in Galatina, southern Italy, students in the final Phase 4 at the International School of Flight Training (IFTS) will move to the new campus under construction at Decimamannu air base, Sardinia - the first stone was laid on December 16, 2020 -,  starting from 2022.
It will become a new world center of excellence for military flight training able to host students, technicians, as well as leisure and sports areas, a cafeteria, and maintenance and logistics infrastructures to guarantee the readiness of a 22 advanced M346 trainer jets (designated T346A by the ITAF), 18 owned by the Italian Air Force and 4 by Leonardo.
“The International Flight Training School is able to meet the growing demands of the Italian Air Force and partner countries for pilot training. It is a virtuous example of a synergic collaboration between the military and industry, which, in turn, generates an important return for the whole country. We’ve combined the Air Force’s established know-how and Leonardo’s excellence in military pilot integrated training systems with maximised cost-effectiveness, whilst strengthening the international role played by Leonardo as a Training Service Provider,” Alessandro Profumo, CEO of Leonardo, said.
Italy currently conducts Phase 2, 3 and 4 at Galatina, where the pilots in the first two phases fly the MB339 and those in the last the T346A. While the pilots of Phase 4 will move to Sardinia, the students of the first and second phase will remain in Galatina which will start receiving the new M345 jet in a few days. Thanks to the introduction of the M345, Italy will be one of the very few nations to continue carrying out these three phases with jet aircraft.

Among the current students at the Italian school are pilots from Kuwait, Austria, Saudi Arabia, Greece and Singapore. Students from Qatar will also soon arrive following a bilateral agreement signed in November 2020 between Italy and the Gulf State. The new center will allow double the number of students to graduate on an annual basis, rising from 40 to 80, of which two thirds come from foreign armed forces.

In addition to student pilots, the school has qualified instructors from Austria, Greece, Argentina and the United States who now teach there. It is also a source of inspiration for many nations who rely on the Italian training syllabus to set their own. An example is the United States, which is also looking to Italy to set up its future training process based on the new Boeing T-7A jet.

The high capabilities of the IFTS are the result of the very long experience of the Italian Air Force in flight training and Leonardo systems which are among the most advanced in the world.
“The Italian Air Force and Leonardo share expertise and technologies to create, in the most cost-effective way, modern professionals, able to operate and manage increasingly technological and complex aircraft. Competences, quality and long-established experience of both the Air Force and our national industry in the training sector are the best calling card for this excellent training offer,” Italian Air Force Chief of Staff Gen. Alberto Rosso said. 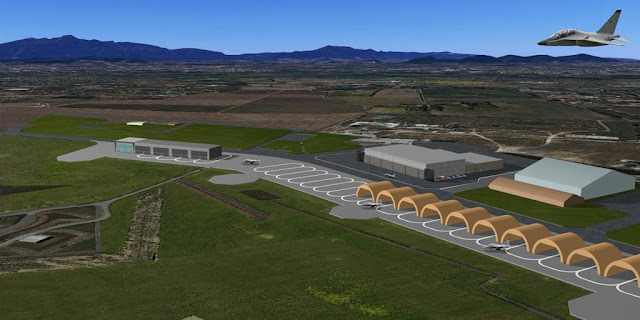 The campus will include an entire building that will house the Ground Based Training System (GBTS) with classrooms and the latest generation simulation systems. The flagship will be the so-called Live, Virtual and Constructive (LVC) training capability which allows ground simulator pilots to "see" real pilots in the air and train alongside them, while pilots in the air can "see" the simulated aircraft through their on-board programs. Thanks to this revolutionary system, it is also possible to generate "red air" scenarios that include hostile aircraft. Furthermore, the number of complete mission simulators will rise to three from the current two in Galatina, while the number of Part Task Trainers will also rise from two to three. These advanced systems will allow students to conduct 50% of the training on the ground, with great cost savings.
"The International Flight Training School brings a very high level of technological innovation and cutting-edge training skills, which will contribute to enhancing the role of the Italian Air Force and our Company in an increasingly complex and competitive international context. For this reason, Leonardo will provide skills, technology, and innovation to support the creation of the most important training centre for military aviation, a source of pride for Italy, for Europe and for our strategic allies,” Luciano Carta, Chairman of Leonardo, said.

Currently the Italian Air Force uses Decimomannu as a deployment base to reach the nearby polygons which will also be open to students of the flight school. The M346 is very similar to the most advanced fighter aircraft, it allows students to conduct shooting exercises as well as aerial combat or air refueling. The school can thus take over much of the work that in the past was carried out by OCUs (Operational Conversion Units) at significantly higher costs. Such capabilities make the IFTS one of the best options for training current and future pilots for the most advanced fighters in the world, such as F-35 or FCAS.
Here is a video preview of the new IFTS
Written by Matteo Sanzani
Source: Leonardo, Italian Air Force
Photo Credits: Leonardo, Italian Air Force
Highlights Industry M-346