The mission aims to prepare Qatari officers for the arrival of their F-15QA combat aircraft.

U.S. Air Forces Central Command conducted a bi-lateral key leader engagement known as the Qatar-AFCENT Friendship Event Aug. 23-24, 2020, at Al Udeid Air Base, Qatar.
The event brought together members of the 379th Air Expeditionary Wing, 332d AEW and the Qatar Emiri Air Force in a continued commitment to maintaining a strong relationship between the U.S. and Qatar.

During the event, Qatari and U.S. pilots, weapon systems officers, and maintainers learned about the F-15QA, a dual-role fighter and the most advanced version of the F-15 Eagle to date. Together, crews engaged in mission planning before the U.S. pilots took Qatari leadership on an F-15E Strike Eagle familiarization flight.

“It’s exciting we were able to get out here and fly F-15 Strike Eagles with the Qatar Emiri Air Force and help set conditions for their first aircraft deliveries next summer,” said Maj. Gen. Michael Koscheski, U.S. AFCENT deputy commander. “This event allowed us to establish a good cross talk about what it means to employ such a versatile aircraft and demonstrates our strong partnership as we find better ways to enhance training, integrate capabilities and build capacity.”

The event also allowed U.S. members to tour and learn about the Mirage and Rafale fighter jets, which have served as the core of Qatar’s fighter fleet prior to its acquisition of the F-15QA.

“I have to say it is one of the best aircraft,” said the fighter pilot. “It’s a powerful aircraft that I hope to fly myself next time. It will serve as the backbone of my Air Force and I am looking forward to its delivery.” 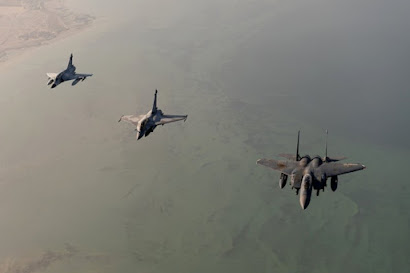 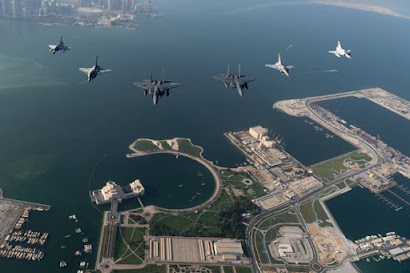