Right in the heart of Texas, somewhere north of Dallas, stands one of the largest training facilities in the US Air Force. Sheppard Air Force Base is located five miles (8.0 km) north of Wichita Falls and ιt is the largest and most diversified training base in Air Education and Training Command.

The host unit at Sheppard AFB is the 82d Training Wing (82 TRW), which provides specialized technical and field training for officers, airmen and civilians of all branches of the military and foreign nationals. But Sheppard AFB also hosts the 80th Flying Training Wing (80 FTW) which conducts the Euro-NATO Joint Jet Pilot Training (ENJJPT) program, a multi-nationally manned and managed flying training program chartered to produce combat pilots for both USAF and NATO. This international flying training program is the only one in the world.

ENJJPT provides flight training to student pilots from nine NATO partners: Belgium, Canada, Denmark, Germany, Italy, Netherlands, Norway, Turkey and the United States. Greece and Spain for years were taking part into this training organization but they were only providing instructors. Spain started also to send its first students at the end of 2019 while United Kingdom resumed its contribution by resending instructors in July ’19 and students in August '19. Romania is the new member who started to send its first students in May '19. Right now Portugal is the only non-active signatory. The ENJJPT trains 50% of all USAF fighter pilots and is the sole source of fighter pilots for partner nations: Belgium, Denmark, Germany, Netherlands and Norway.

While hosted at an American base and having an American Commander, ENJJPT is not an American program, but an international one, managed by all the participant nations. All 14 participating nations have a say in what the syllabus is, and how the program is run by representatives of their respective ministry of defence. All the leadership positions within ENJJPT — besides the Wing Commander — can be filled by any of the participating nations. Each nation assigns both students and instructors, with costs being shared across the board depending on how many students are in attendance.

The program's seeds were planted in the mid 1960s when the West German Air Force purchased a small fleet of T-37 and T-38 training jets and began sending pilots to train at Sheppard to make use of the relatively good weather conditions that prevail there throughout the year. Based on the success of that German training initiative, the expanded ENJJPT program as it is known today was formally stood up in 1978.

In June 1980, the then US Secretary of Defence Harold Brown, announced that Sheppard had been formally selected for ENJJPT. It officially opened on October 23, 1981. Due to its success over the following years, combined with a number of stalled attempts to bring more training to Europe, the initial 10-year hosting period at Sheppard has been extended multiple times. It is now extended through 2026, with no current plans of moving elsewhere. Since then, the program has pinned wings on over 7700 pilots and counting.

ENJJPT offers four distinct training programs. In addition to Undergraduate Pilot Training (UPT), it provides in-house instructor training (teaching pilots how to become instructors), Introduction to Fighter Fundamentals (IFF) and IFF upgrade instructor pilot training (a syllabus for upgrading instructor pilots to IFF instructors). About 200 student pilots earn their wings at ENJJPT annually. Around 80 new instructors are trained per annum, and up to 150 pilots’ transition through IFF each year.

The UPT element involves running eight classes per year, each with around 25 students learning their new trade over a 55-week period, and is roughly divided into three phases. Not all students go through all phases of UPT - this depends on where they are from and the aircraft type they will progress to in the future. For example, they might just take the first two phases, or join the program for the third phase only.

Once students have conquered the T-6, they’re on to the T-38. Phase 3 spans a further 24 weeks, with 137 more hours of ground training, 36 simulator sessions and 79 sorties in the Talon, totalling 90 hours in the air.

Upon completion of phase 3 on the T-38, students are awarded USAF pilot wings and they’re hard earned. When all is said and done, students who complete the full UPT program will have pounded out 475 hours of ground training, 99 hours in sims and 195 hours in the air, all in roughly a year!

Students selected to move on to fighters then go on to fly the Introduction to Fighter Fundamentals (IFF) course, where they'll begin learning the actual fighting component of being a fighter pilot. That nine-week course consists of another 80 hours of academics, nine simulator sessions and 16 intense sorties in the air again on the T-38.

The IFF portion of the ENJJPT syllabus is likely to be the most demanding part of the course for most students. Not only are the days long and the flow of information relentless, but the missions the students fly are also incredibly physically demanding, thanks to the constant Gs they pull while trying to get the best of the instructors flying as their opponents. This is the first time the students will strap into the jet with the intention of learning to use it as a weapons delivery platform, the sole reason a fighter exists. That's a serious responsibility and the students don't take it lightly, spending hours preparing, briefing and debriefing their missions in addition to the time they actually spend flying.

Most fighter pilots will continue on to IFF before they head for their respective operational conversion courses for the front line. However, others may be invited to remain at Sheppard for a follow-on tour as an instructor.

The IFF course at ENJJPT has various streams tailored to the role of the front-line fighters that students will eventually find themselves in depending on their home nation's fleets.

Not every student at ENJJPT completes the full syllabus, as some of the international students receive varying levels of equivalent training at home. Pilots of all nations selected to fly platforms other than fighters do not complete the IFF course. They fly a modified final few weeks of their UPT course in order to prepare them for the environments they'll be moving on to, most often multi-engine aircraft.

Students who find themselves at Sheppard flying only the T-38 follow a similar structure, first learning to fly the T-38 on the UPT phase of ENJJPT prior to receiving their USAF wings and then learning to fight it on the IFF course.

By the end of their training, all graduates of the ENJJPT will have covered all the material which include: instrument flying, basic and advanced two-ship formation, four-ship formation, low-level navigation, basic fighter manoeuvres (BFM), air combat manoeuvring (ACM), close air support (CAS) and air-to-ground weapons delivery.

The flying training at Sheppard comes under the 80th FTW and the US Air Force's Air Education and Training Command (AETC). The Wing has 211 aircraft, (76 T-6 and 135 T-38), which are divided into five fight training squadrons (FTS), two of them flying the T-6A Texan II, and the other three the T-38C Talon.

The Beechcraft T-6A Texan II, based on the Swiss Pilatus PC-9, is used for basic training for new students arriving at Sheppard. It was introduced into service with the USAF in 2001, replacing the Cessna T-37B ‘Tweet’. The advanced phase sees a step up to the popular, but aged T-38, which has been a USAF staple for almost 60 years. Today, as per regular USAF training units, ENJJPT trainees fly the upgraded T-38C. Both aircraft fly approximately 230 sorties per day. For the year 2019 these two types performed 50.543 sorties and logged 60.282 hours.

As might be expected for a Wing with such a vast remit, the flying day at Sheppard starts early and the pace is relentless. As Major Spiros Batzios, the Greek Senior National Representative (SNR), comments: 'Flying starts from seven o'clock in the morning to six o'clock in the evening for the last landing during the summer, and in the winter we're flying from sunrise to sunset. When every single one of those minutes of the day are used for take-off and landing, sometimes the capacity limitation is literally just daylight.’

An everyday example for a young first comer is, if he/she is scheduled for the first (of around four waves per day) flight of the day, it means that he/she has to wake up around 4:15, heading into work at 5:00, prepping a briefing room, getting the latest weather, NOTAMS and co-ordination with the range (if surface attack mission) and being all set to brief with his/her flight instructors for 06:00. The briefing will last around an hour at which time he/ she will be stepping to the jet for a 07:15 takeoff. The flight usually lasts around one hour, after which the debriefing will take place which generally lasts from 1,5 to 3 hours! 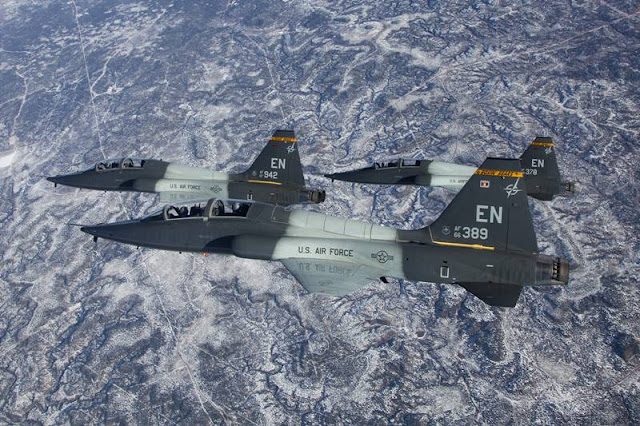 The T-38's turning ability isn't quite as impressive as its speed. The Talon has tiny wings and the jet is definitely at its most comfortable at higher airspeeds. Being optimized to fly fast means the T-38 needs to maintain higher speed in turns. The T-38's two afterburning J-85-GE-5 engines are also fairly fuel-hungry compared to more modern trainers, meaning the Talon falls well short in terms of range and endurance.

The T-38 is still hard at work around the USAF, with 546 jets still actively employed. The Air Force T-X (now T-7 Red Hawk) program is looking for a replacement more suited to getting pilots ready for the fifth generation fighters and beyond, but it's a testament to these planes that they're still being successfully employed in large numbers so many decades after they were designed and built.

The current Talon fleet that is being used at ENJJPT is composed of C-models, with some significant upgrades installed in the early beginning of 2000s. The airframes are the same - no new T-38 airframes have been produced since 1972- but engines and avionics have been revamped.

Today's C-model features a propulsion upgrade that improves engine reliability and increase thrust at low altitudes. The avionics were also modernized with the addition of a head-up display (HUD), glass multi-function displays, GPS, traffic collision avoidance system (TCAS) and more. With a maximum speed of Mach 1,3 at altitude and Mach 1,08 at sea level, the T-38's most notable feature is its speed. There are only a small handful of supersonic jet trainers currently in operations around the world and the T-38 is the only one flying for a Western air force.

As the Greek Major Vasileios Tsaparis told us: ‘The T-38 is a complex machine: afterburner, two engines, so it expands your horizon way more. It's an old aircraft, so it's not as easy to fly. It's not very forgiving at low speed. Around the landing area, it's pretty sporty. The T-38 is also the fastest- landing aircraft in the United States Air Force fleet, with an approach speed varying from 160-200 knots, depending on configuration and fuel weight at time of landing, making for more challenging landings, at least at first.’ 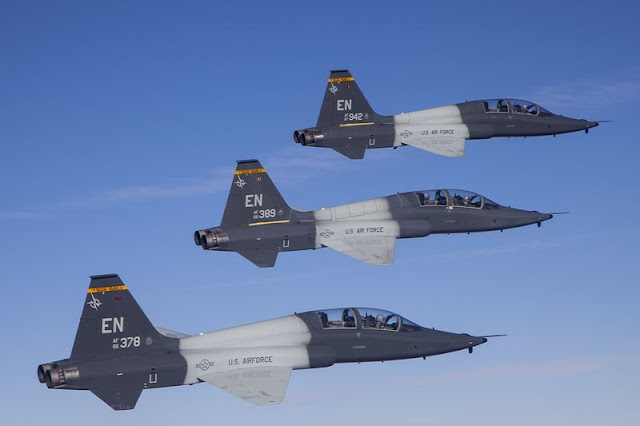 From the Gulf War, to Bosnia, to Libya and most recently airstrikes against ISIL, there has never been a combat deployment where NATO forces haven't been called up. This international cooperation and interoperability is first taught in ENJJPT and this is what makes it so valuable. In addition to the world-class flight training they receive from the program's corps of international instructors, the students also gain valuable exposure to NATO's principles and to work with partner nations. This is the reason why ENJJPT program will continue to be the world-class flight training program for many air forces worldwide. That unique experience can benefit all young aviators who are going to become leaders in an international environment adding to their readiness to answer the call to arms when it eventually comes. 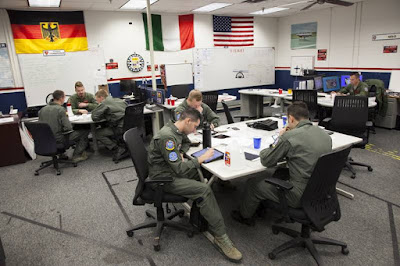 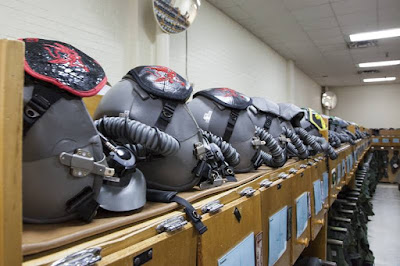 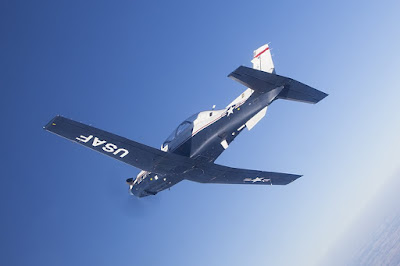 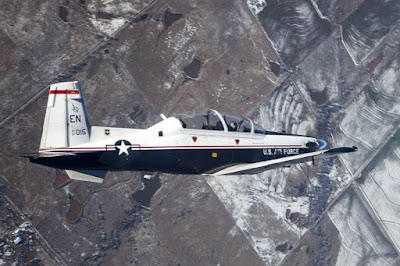 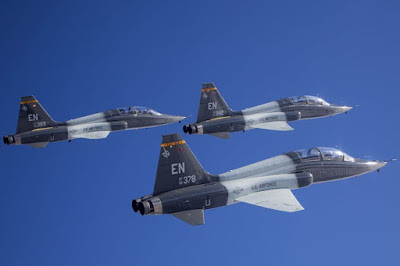 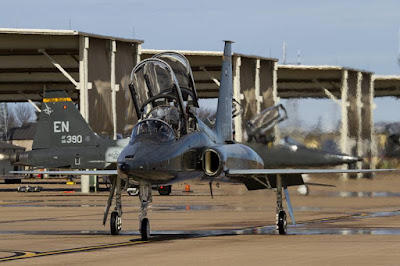 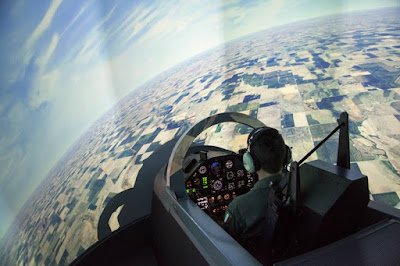 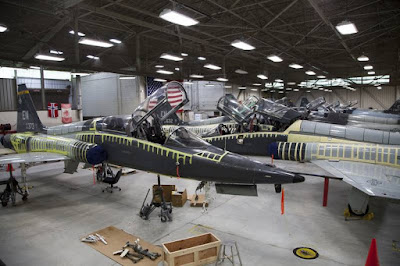 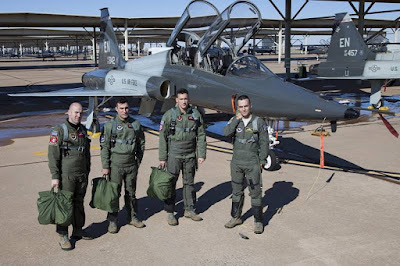 The author would like to thank Lt Megan Morrissey for making this article possible along with the Greek SNR Lt Col Spiros Batzios and the rest of the Greek team for their kind hospitality.