Over the next decade, more than half of the trainer aircraft currently in use will need to be replaced. This creates strong pressure on manufacturers to meet the market needs for this segment. However, while sales for turboprop aircraft are doing well, those for jet trainers are rather slow.

The recent acquisitions by France and Spain of the Pilatus PC-21 show how the armed forces are currently focusing more on turboprop aircraft than on jets. The Swiss-made turbobrop was chosen to replace FAF Alphajet and SpAF CASA C-101 jets.

Although modern turboprops boast the same features as jets, it is not clear whether they can effectively cover the advanced training phase (Lead-In Fighter Trainer - LIFT). Many armed forces are firmly convinced that it must be carried out by flying jets and use turboprops in the basic and intermediate phases. Operators are therefore faced with a choice: to sacrifice part of their advanced training skills and complete training on 40-ton combat aircraft (match LIFT to OCU) or introduce two types of trainer aircraft (turboprop + jet).

This discrepancy between market needs and manufacturers' offers led to the decision to launch new projects such as the Czech L-39NG and the Italian M-345. They can be considered medium-class aircraft capable of replicating most of the capabilities of high-performance jets. Even if these systems are not able to cover the whole LIFT phase, thanks to the advanced systems on board they can provide a reasonable compromise, eliminating the need to introduce more types of aircraft. However, it is not clear whether the two aircraft are the answer to the demand of the armed forces as both are not enjoying great sales success.

The same goes for high-performance aircraft. Although they have been on the market for many years, they cover a small portion of it. So what can be the choice of the armed forces? The trend for the future seems to be to adopt turboprop aircraft for the first three training phases and to complete the advanced phase on front-line combat aircraft.


There is also an additional option that many countries are considering. It consists of sending their student pilots to foreign military training schools equipped with advanced trainer jets. An example is the International Flight Training School (IFTS) born from the collaboration between the Italian Air Force and Leonardo SpA and equipped with M-346. It is intended only for the phase IV (LIFT). This proves how the market is moving in this direction. 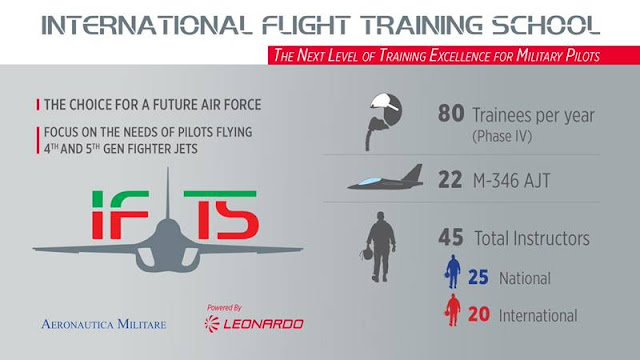 In a couple of years the picture will be more focused, but it is already certain that it will be increasingly rare to see light jets in the lines of the armed forces, while the offers from flight schools will increase considerably.

Note: Boeing T-X was not included in this article as there is currently little data to evaluate its market outside the USAF.