On 9 September 2019 the first Dutch F-35A (F-009) assembled outside the United States successfully completed its first flight. The Lightening II took off early in the afternoon from the Final Assembly and Check-Out (FACO) at Cameri, northern Italy, escorted by an Italian Air Force Typhoon as chase aircraft.

AN-9 is the ninth of the Netherlands’ order of 37 F-35A jets. The first eight jets are being assembled at Lockheed Martin’s Fort Worth facility in the U.S. During the coming weeks it will conduct test and acceptance flights in Italy before being delivered to Leeuwarden Air Base, Netherlands, next month. It will be the first F-35 to reach its home base in the Netherlands as the first 8 aircraft are currently all based in the United States. The remaining 28 aircraft for the RNLAF will all be assembled in Italy.

The official roll-out ceremony for the AN-9 is scheduled for 12 September at FACO-Cameri. 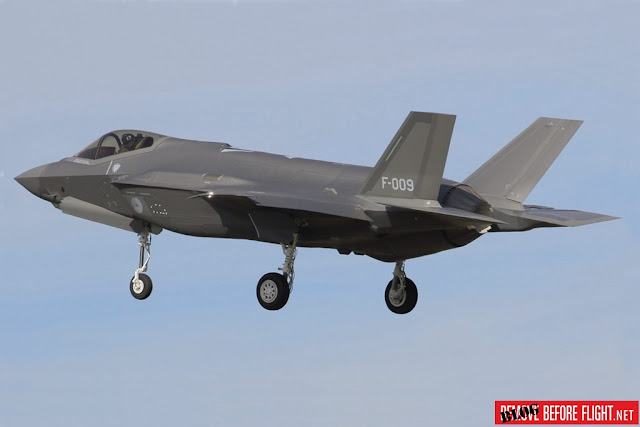 To date ten F-35As and two F-35Bs have been delivered by FACO-Cameri, the only F-35 production facility located outside U.S.; six of them are currently stationed at Luke AFB, Arizona, and MCAS Beaufort, South Carolina, in accordance with the international pilot training programme, while six are stationed at Amendola Air Force Base, Italy.