On July 12, the Spanish government began final assessments for the acquisition of a new aircraft to replace the old CASA C-101 trainer jet. The deal worth 225 million euros should be finalized during the coming weeks and deliveries of the new platforms are required by 2020. The contract will include 24 aircraft and 4 flight simulators and the first systems will have to be operational by 2021.

The market offers different solutions, but considering that the new platforms will have to train pilots who will be assigned to modern aircraft such as the Eurofighter or A-400, the most prudent choice is certainly the Leonardo M-345 and its simulator, as we had previously highlighted here.

The M-345 represents the latest generation of Leonardo trainer aircraft, perfectly suited for covering the entire pilot training syllabus, from basic to advanced missions. It has already been ordered by Italy to renew the fleet of the Italian Air Force flight school at Galatina AFB starting from 2020. In addition, it will equip the Frecce Tricolori aerobatic team shortly. Current orders include 18 jets, but the number will be increased over next few years.

The M-345 and its simulator have been developed based on the excellent experience gathered with the proven M-346. It boasts higher performance compared to heavy turboprop trainers and provides student pilots with a training environment that simulates the flight behaviour, manoeuvre capability, and physical experience of jet aircraft. 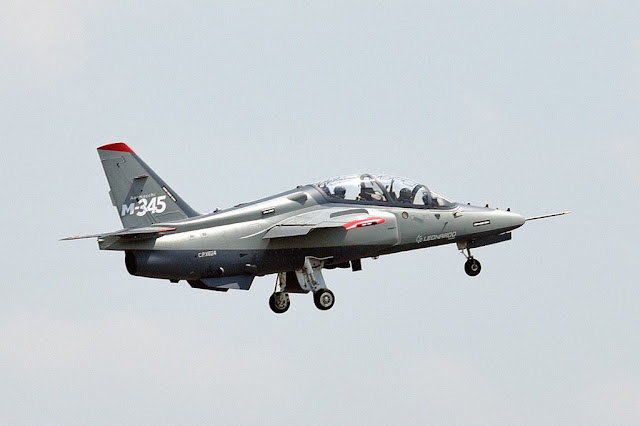 The M-345 offers state-of-the-art avionics, flight simulators and other ground-based teaching aids, in addition to an integrated simulation system on board the aircraft, all of which are seamlessly integrated into a single LVC (Live, Virtual, Constructive) training environment.

The aircraft is fitted with simple and basic onboard systems that require a minimum amount of maintenance, and are able to guarantee maximum safety and reliability. The result is a highly efficient trainer aircraft powered by a turbofan engine, but with purchase and life-cycle costs comparable to those of turboprop trainers and better performance compared to the latter.

The optimal balance between real flying experience and appropriate simulation brings costs down without compromising the quality of training, allowing the new M-345s to generate a greater number of training missions compared to the aircraft currently in service.

It is undoubtedly the right solution to guarantee the Spanish Air Force high performance at low cost, in the right times. However, the Spanish government and military officers are also evaluating turboprop planes, but as some fighter pilots have told us during the past few years: "students designated to jets should do the final stages of training by flying a jet."

👉 You may also like: SPAIN LOOKS AT HOMEMADE TRAINER AIRCRAFT, IS IT THE RIGHT WAY?