On November 15, 2018, the Naval Air Station of Luni, Italy, celebrated its 50th anniversary through a series of events involving military and civil authorities, as well as the surrounding citizens. The celebration began with the military ceremony attended by the Captain of Vessel Onofrio Marco Frumusa, the Rear Admiral Placido Torresi, the Admiral Donato Marzano, together with representatives of the Forces of Order and surrounding municipalities and several former members of the Italian Navy.

The military authorities have marked all the important goals reached by the personnel of the base during the first half century of history, but also underlined how the same motivation and determination of the "warriors" of the past should be an example to face the new challenges of the future.

"This anniversary marks an important milestone that should make us reflect on the fatigue, passion and commitment shown by the men who have preceded us: they have never given up! It is a witness passed from generation to generation, handed down with indomitable spirit to allow the Navy to reach the great goals that are obvious to everyone," Captain Frumusa said.

The personnel of NAS Luni has made more than 195,000 flight hours since the establishment of the base to date, taking part in many international operating theaters. 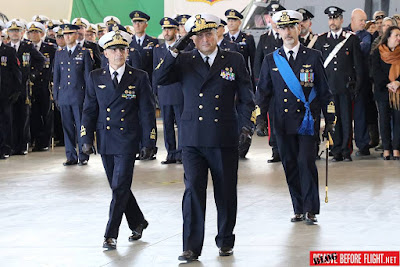 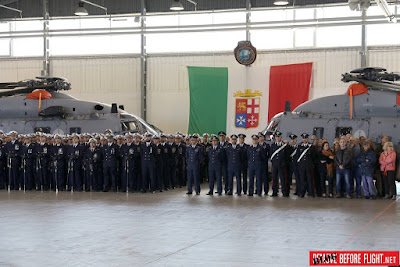 Rear Admiral Placido Torresi highlighted the technological evolution of the Italian Navy: "The helicopters EH-101 and SH-90 are just a starting point: new helicopters will have to be tested to meet the needs of the Naval Squadron and the base will soon receive the flight simulator of the SH-90 which will implement the existing one of the EH-101. These are great technology, but that could not work without the support of valuable personnel."

Torresi also talked about the new F-35B stealth fighter: "During the next few years we will introduce the modern F-35 aircraft as the Harrier's operational life will end in 2024-25. The F-35 will start testing on board the Cavour in 2020."

The last speech was made by Admiral Donato Marzano, Commander in Chief of the Naval Squadron, which marked the strong union between the base and the surrounding territory: "Here is a system that works perfectly and this ceremony will never end because the military grades remain marked on our hearts. Almost 200 thousand flying hours have been carried out here in fifty years and we must be proud of the results obtained thanks also to the work done in synergy with all the representatives of the surrounding territory." Marzano also mentioned Andrea Fazio, he was a flight specialist who died in the helicopter crash of last April during the "Mare Aperto" exercise. 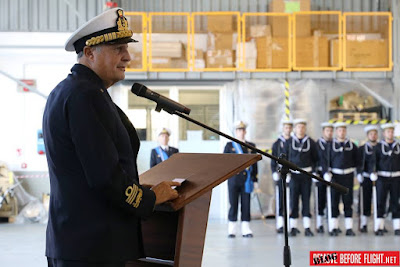 The tribute to the fallen also continued at the end of the ceremony with the blessing and deposition of a laurel wreath in front of the monument dedicated to them. 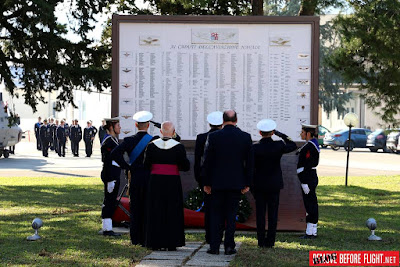 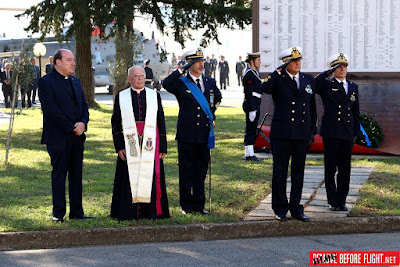 At the end of the ceremony the guests were able to admire a great static exhibition of aircraft set up by the personnel of the base that included the helicopters belonging to the home-based Squadrons, the First and the Fifth, and those of some guests. The visit began with an MH-90 and a SH-90, both belonging to the Fifth Sqn. The first was armed with a 7.62 mm Dillon M134D machine gun and the second with a Marte MK2/S missile. The SH-90 is the last helicopter entered in the Navy fleet and is a medium weight aircraft and one of the most advanced in the world thanks to the "Fly by wire" flight control system. It is equipped with a surface detection radar and an underwater tracking system composed of a sonar and sound buoy launcher. It can be armed with Dillon M134D machine gun, MU-90 torpedoes and MK2/S anti-ship missiles. The fleet of the Fifth Sqn, currently being completed, will consist of more than 15 helicopters including the NFH (NATO Frigate Helicopter) version and the Tactical Transport Helicopter (TTH) version for assault missions and special forces support. The Fifth Sqn performs anti-submarine, anti-ship and air assault missions mainly in support of the Naval Squadron, Raiders and Divers. 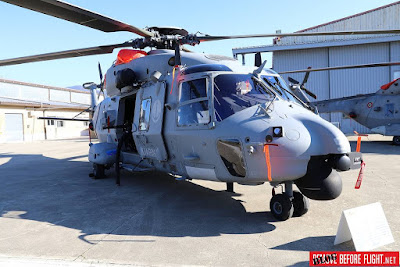 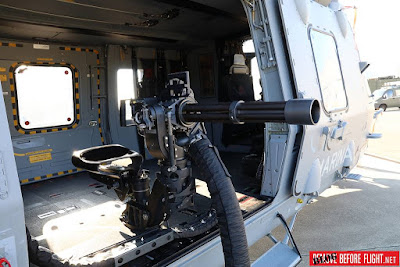 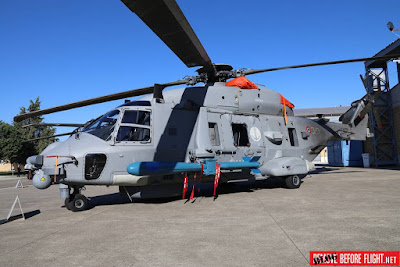 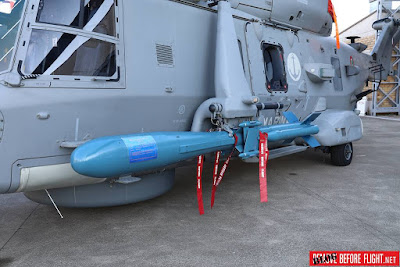 The exhibition also included an EH-101 belonging to the First Sqn. The EH-101 is a medium, multi-role aircraft, with the ability to operate in any weather condition. Depending on the version, it can be equipped with detection radar, low frequency sonar, and armed with MU-90 torpedoes, Marte MK2/S anti-ship missiles, CHAFFS / FLARES launchers and MG-42/59 machine guns. The helicopters of the First Sqn are in the ASH version and are equipped with a ramp for the tactical transport of personnel (up to 34 people or 16 stretchers) and vehicles. The First Sqn mainly carries out air assault and support missions to the Special Forces operating from naval units or from the ground. 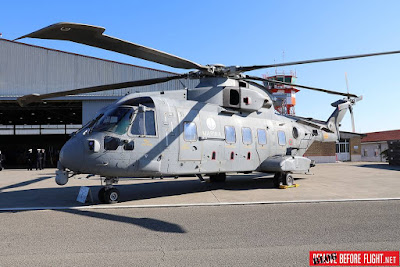 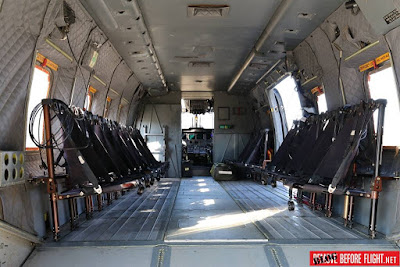 Both Squadrons also perform support missions to the Civil Protection, SAR and MEDEVAC.

Along the flight line there were also some guests: two AH-129D Mangusta attack helicopters from the 5th Regiment "Rigel" of the Italian Army, which will start a mission aboard Cavour aircraft carrier soon, and an AW139 of the 1st Flight Group of the Italian Coast Guard. 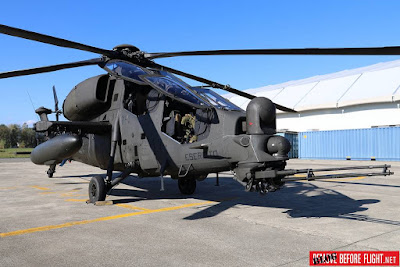 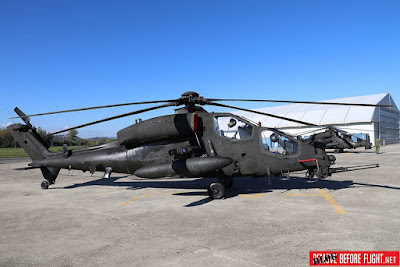 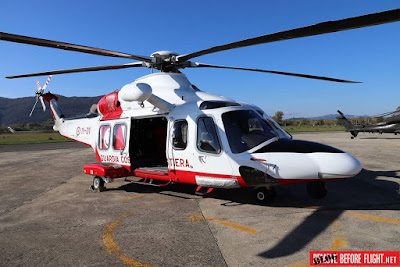 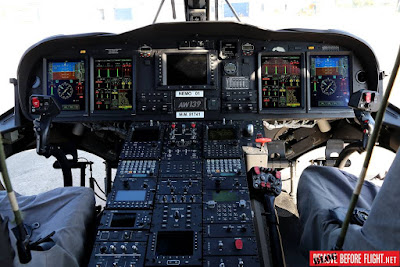 In addition to the outdoor display, inside one of the main hangars, some aerospace companies exhibited their latest technologies. Leonardo, the main sponsor of the event, has shown its new AWHERO which is a system belonging to tactical UAVs, capable of performing land operations in complex environments and operating at sea even with critical weather and marine conditions. 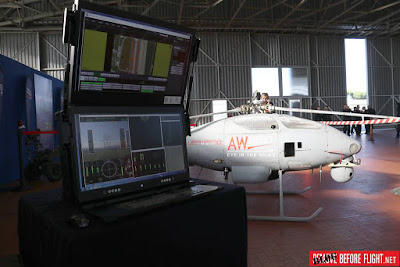 The celebration continued on November 16 and 17 with an Open Day that included visits to aircraft and structures of the base.