The Harrier and its crew will later cross the Atlantic Ocean with the Sailors and Marines aboard the Iwo Jima, as the Iwo Jima Amphibious Ready Group, along with the embarked 26th Marine Expeditionary Unit (MEU), returns from their deployment. Upon their arrival in the United States, the Italians will fly the Harrier to Marine Corps Air Station Cherry Point, North Carolina, for a scheduled preventative maintenance inspection (PMI), a process which will take up to six months.

“Italy and America have an agreement where we will bring over our planes for maintenance,” said Italian pilot, Lt. Domenico Iovino, “After the maintenance is performed, we will come back to the U.S. and take the plane back to Italy.” 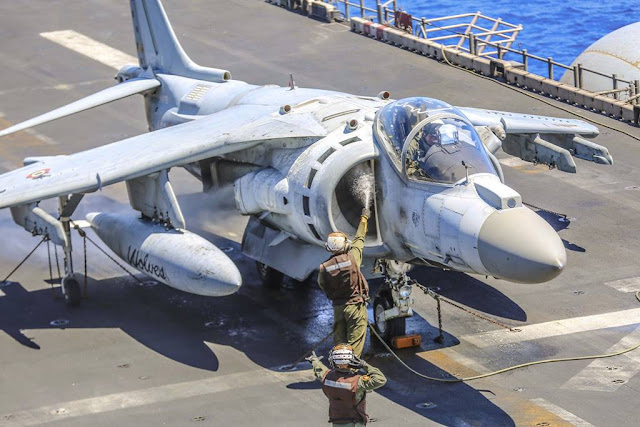 Many U.S. deployments pass through the U.S. 6th Fleet area of operations, making it opportune for the Italian Air Force to fly on and execute these types of missions.

“We have done this several times in the last few years,” said Italian Lt. Cosimo Manica, also a Harrier pilot. “We have taken approximately 10 planes from Italy to the United States for PMI, which can only be done in America.”

“The program that we go through to become a Harrier pilot is taught the exact same way as it is to Americans, and the planes are the same, so there is not much difference when landing on the American ships,” Manica said. “Our landing procedures are almost exactly the same as well, so there are no problems when we come in to land on U.S. Navy ships.” For the two Italian pilots, this journey is one that they are now accustomed to making.

“The three have us have known each other for many years,” said Maj. Matthew Seavitte, the Harrier Det. officer in charge. “We’ve been deployed for a while, so it is always nice to see some old friends here aboard the ship.”

The Iwo Jima and 26th MEU are on a scheduled deployment in support of maritime security operations and theater security cooperation efforts in the U.S. 6th Fleet.