Airbus’ next-gen oversize cargo airlifter receives its colours ahead of a history-making first flight this summer.


Airbus’ first BelugaXL is “all smiles” after rolling out from the paint shop in Toulouse, France, where this next-generation oversize cargo airlifter received its distinctive livery – which features beluga whale-inspired eyes and an enthusiastic grin.

With a bulging upper forward fuselage and enormous cargo area, Airbus’ BelugaXL already is highly recognisable. The addition of a cheerful face to the distinctly-shaped airframe will further reinforce it in the public’s mind. The unconventional paint scheme was selected by Airbus employees in a company-wide vote conducted last year.

The BelugaXL was launched in November 2014 to address the transport and ramp-up capacity requirements for Airbus beyond 2019. Derived from the freighter version of Airbus’ A330-200 jetliner, the BelugaXL is six metres longer, one metre wider and has a payload lifting capacity four-tonnes-greater than the current Beluga A300-600ST. 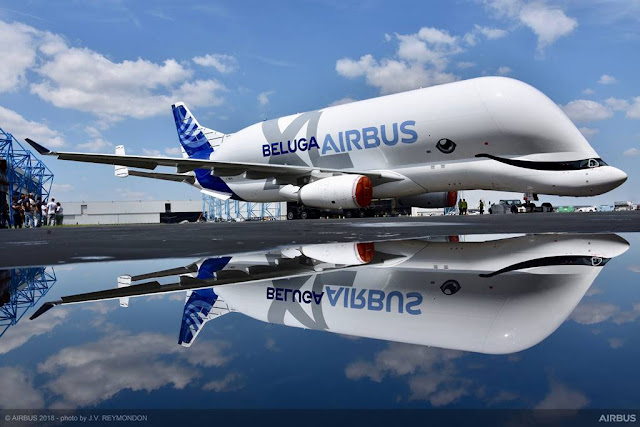 To be operated by the Airbus Transport International (ATI) subsidiary, the fleet of five BelugaXLs will take over transporting complete sections of Airbus aircraft among the company’s production sites around Europe and to final assembly lines in France, Germany and Spain.

The paint shop rollout is another major milestone as Airbus’ first BelugaXL concludes a comprehensive ground testing phase – including a total of 72 specific evaluations required prior to the aircraft’s maiden flight. This included the heavy ground test phase, which focused on introducing loads into the highly modified airframe, followed by an eight-day ground vibration campaign that wrapped up earlier this month.

Scheduled for July, the BelugaXL’s upcoming maiden flight will kick off a 10-month flight test certification campaign leading to planned service entry in 2019.