The 81st Fighter Squadron received the A-29 to help continue the Afghan light air support training mission. The aircraft will be used by the Afghan Air Force for close-air attack, air interdiction, escort and armed reconnaissance.

A new wave of A-29 Super Tucanos arrived in support of the 81st Fighter Squadron’s training mission at Moody AFB, April 24 and 26.

The A-29s will aid in the continuation of the Afghan light air support training mission, which ultimately provides Afghan pilots with the capabilities of finding, tracking, and attacking targets either on their own or in support of ground forces.

"The A-29 program has been an integral part of the U.S. government's overall 'Building Partnership Capacity' efforts around the world and immediately supports the development of an indigenous air force in Afghanistan," said Brig. Gen. Christopher Craige, formally acting commanding general at Train, Advise, Assist Command-Air (TAAC-Air).

"This rapidly developed program for Afghanistan is unique for the A-29 development because this is the first time USAF pilots and maintainers have been trained as instructors to conduct training for Afghan students in the United States." 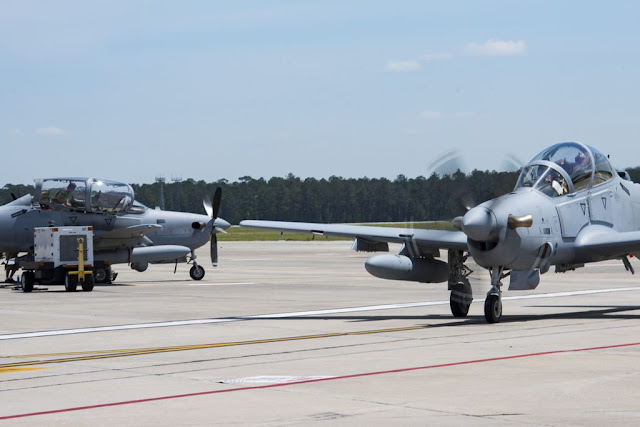 Designed to operate in high temperatures and in extremely rugged terrain, the A-29 is a highly maneuverable fourth-generation weapons system capable of delivering precision guided munitions. The aircraft is being used by the Afghan air force (AFF) for close-air attack, air interdiction, escort and armed reconnaissance.

“We have been engaged in a struggle against these terrorists for over 16 years, and there is still plenty of work to be done,” Hill said. “Providing the Afghans with the ability to fight these enemies themselves relieves our own forces while strengthening the Afghan military and providing them with a great source of national pride.

“The Afghan pilots and maintainers we have trained here at Moody have been in combat for over two years now and have done an incredible job,” Hill continued. “At significant personal risk, they have pushed the Taliban back, regaining several provinces, and all the while having no fratricide or confirmed civilian casualties. This is an amazing accomplishment for a fledgling air force. The Afghans have a lot to be proud of, and are taking enormous steps toward a sustainable peace.”

An AFF A-29 pilot, who can’t be identified for security reasons, said sometimes a nation needs their military to pressure the enemy in order to develop peace and stability.

“The AAF plays a major role in this,” said one Afghan A-29 pilot. “We are helping the peace process. When an A-29 is overhead, it gives motivation to the ground troops, and the enemy realizes they can be struck anywhere and will feel the pressure to come to the peace table. This is how we will bring peace and stability to Afghanistan.”