The 4° Stormo (4th Wing) of the Italian Air Force has recently marked a milestone reaching 50,000 flight hours on the Eurofighter aircraft. The Typhoon entered service in the Unit from 2004 to ensure national airspace.

The 50,000 hours include training and operational missions carried out over national airspace and operations done outside the national borders such as NATO Air Policing missions by the pilots of the IX Gruppo Caccia (9th FS) and the XX Gruppo Volo (20th FS). In addition, more hours were flown during the QRA service. 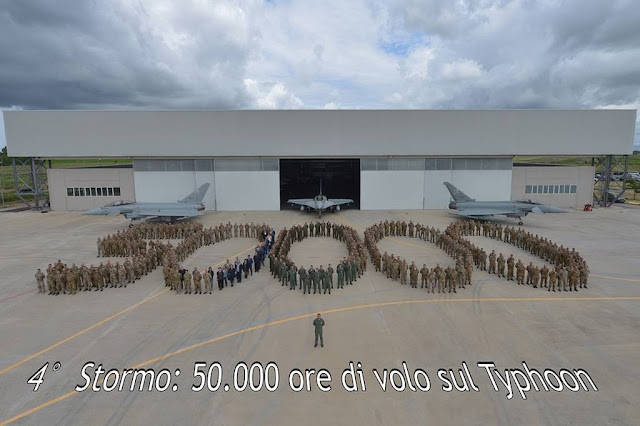 The main task of the 4° Stormo is the surveillance of the National Airspace. The Unit is equipped with the modern F-2000A Typhoon fighters to ensure the QRA Service, 24 hours a day, 365 days a year. After the tragedy that occurred on 11 September 2001, the defense of Italian skies has become a priority activity. The pilots of the 4° Stormo have shown their great skills during several interception missions during recent years.

Often the QRA aircraft fly to provide assistance to military or civilian aircraft in difficulty. In many cases interception operations are carried out in support of liners that have assumed suspicious behaviors during the flight such as the loss of radio contact or unjustified deviations from the flight plans.