In this second part we focus on the most recent deliveries and the two latest versions of the Greek F-16 fleet.

The Block 52+s’ are the most numerous F-16s in the inventory of the Hellenic Air Force. Most of them equip the 115 CW at the base of Souda AB on the island of Crete, where the two Squadrons, 340 Sq "Fox" and 343 Sq "Star", utilize 20 aircraft each. The rest of the delivered Block 52+s’ are based in 110CW in Larissa AB equipping the 337 Squadron "Phantom".

The 340 Squadron was established on the 18th of April 1953, as part of the 112CW based in Elefsina. It was equipped at that time with the Republic F-84G aircraft. In May 1958 the unit’s aircraft were replaced by the F-84F Thunderstreaks. On the 4th of February 1960, the unit was transferred to the 115 CW in Souda from where it still operates until today. In August 1975, the unit started to accept the new and more modern aircraft, Ling-Temco-Vought A-7H Corsair II which flew from there for 26 years. On the 30th of September 2001, the Squadron was deactivated in order to receive the new F-16s. All the remaining Corsairs were handed over to the 345 Sq. 50 years after its establishment, on March the 3rd 2003, the Squadron was reformed for the introduction of the new aircraft F-16C/D Block 52+.

The 343 Squadron was established in September of 1955 also at Elefsina Base and it was initially equipped with the North American F-86E Sabre in the day interception role. In March 1966, the Squadron transitioned to the Northrop F-5A/B Freedom Fighter. These aircraft continued to serve the 343 Sq for a period of 35 years until March 2001 when operations were temporarily suspended. On the 21st of July 2003 the 343 Sq re-entered operational status in Souda with F-16 C/D Block 52+ aircraft.

The remaining Block 52+s were delivered to the 337 Squadron from the 110 Combat Wing based in Larissa, after withdrawing its F-4E Phantom IIs.

The 337 Squadron Fantasma (Ghost) is the third oldest Squadron of the HAF. It assumed operational duties on March the 30th, 1948 and it was initially equipped with Spitfire Mk. IX. In 1952 a significant change in the history of the 337 Squadron took place, when it successfully passed into the jet era. Through the years, the 337 Sq utilized famous aircraft like F-84G Thunderjets, F-86D Sabres and F-5A Freedom Fighters.

On March the 31st, 1978, after the agreement of the “Peace Icarus II” Program for the purchase of extra Greek Phantoms, the 337 Sq was selected to become the third “Phamous” Phantom Squadron.

After almost three decades of operation of the “Phabulous” Phantom, the history of the 337 Squadron was rewritten again, this time with F-16 Block 52+ aircraft. The Squadron’s reestablishment ceremony took place at 110 Combat Wing in Larissa, on the 20th of October 2006.

The final Greek F-16 acquisition program, Peace Xenia IV, was signed in April 2002. Another 30 F-16s were ordered with an option of 10 more. These new aircraft, all F-16 Block 52+ Advanced, were later named by the HAF as Block 52M. On March the 15th, 2006, the Greek government announced that it had cancelled the option of the 10 additional F-16s.

These aircraft replaced the fleet of the remaining A-7 Corsair IIs, which retired from service in October 2014 and were the last aircraft that HAF ever purchased.

​This last batch of the most advanced F-16s in Europe were gathered in Araxos Base, near Patra city equipping the 335 Sq "Tiger" alongside with the 336 Sq "Olympos" of 116 CW, the final operators of the A-7 Corsair II and the oldest and most famous Squadrons in Greece.

The 335 Squadron “Tiger” is the oldest Squadron of the Hellenic Air Force, as it was established when Greece was under German occupation, in October 1941 at the Palestinian airport of Akir. The Squadron was initially equipped with Hurricanes.

In October 1953 the 335 Sqn became the first Squadron that replaced the propeller aircraft with jets, the F-84G and the RT-33A types. In May 1965, it received the legendary F-104G Starfighter aircraft which kept them operational until May 1992. On April the 3rd, 1993, the Squadron received the A-7E and TA-7C Corsairs. They were kept operational until 2008 when operations were temporarily suspended in preparation for the acceptance of the modern F-16s.

The 336 Squadron “Olympos” was established on February the 25th 1943 in Cairo, Egypt and it was also equipped with Hurricane aircraft. The Squadron followed the exact steps of its “sister” Squadron and in 1953, it also received the F-84G and 5 years later it transitioned to the newer F-84F. In 1965, the Squadron also received the F-104G aircraft which was flying until March the 31st 1993. The Squadron received also the A-7 Corsair II and was the last one to withdraw them. Since March 2008, when the deactivation of its sister Squadron took place, the 336 Sq received all the remaining Corsairs, becoming the last Corsair Squadron in the world. The retiring ceremony took place on 17th of October 2014, marking the end of another great aircraft, the Corsair II.

The coating of this distinctive “Ghost” camouflage of the Greek F-16s is called “Have Glass”, with a radar-absorbing paint capable to reduce the aircraft’s Radar Cross Section (RCS).

The paint included in this “Have Glass” coating is called ‘Pacer Gem” equipped with RAM (Radar Absorbent Material) made of microscopic metal grains that can degrade the radar signature of the aircraft. This material alters the appearance of the paint visually. It is very rough to the touch and contains shiny flakes, almost like metal flake paint.

This new technology, which is used on these later airframes, marks the evolution of the “Have Glass” program. The 50s wear the first generation while the rest 52+s and 52Ms wear the second and third generation respectively.

On the Block 52Ms this “Have Glass III” coating is much cleaner, but on the earlier Block 52+s and Block 50s , the respective ‘Have Glass II” and “Have Glass I” coating has, after all these years, resulted in a distinctive grey and weathered camouflage.

The main external difference of the newer Block 52+s and Block 52Ms is the ability to carry CFTs (conformal fuel tanks). The CFTs are mounted on the top of the fuselage and are easily removable. They provide 440 US gallons or approximately 3,000 pounds (1,400 kg) of additional fuel, allowing increased range or time on station and free up hardpoints for weapons instead of underwing fuel tanks. These external tanks can be attached on to the aircraft within 1 hour and they don't obstruct any service panel making them easy in everyday's use

Another characteristic feature of all the two-seat F-16D Block 52+s and Block 52Ms is the dorsal spine. All the electronics housed behind the cockpit on the single-seat version were moved to the top of the spine to make room for the second seat. It adds 30 cu ft (850 L) to the airframe for more avionics with only small increases in weight and drag. The rear cockpit can be occupied by either a Weapon System Operator (WSO) or an Instructor Pilot (IP) and can be configured for each with a single switch in the cockpit.

The main difference between Block 52M and Block 52+ is that it is equipped with the datalink Link 16. The Link-16 is a tactical datalink integrated into this latter model, providing an updated communications capability. This enhanced system allows aircraft to talk to each other and communicate with those on the ground. Basically, it provides increased situational awareness for the pilot. These newer Block 52 models compared to the previously acquired Block 50s have several other improvements over the Block 50s, the major ones were:

All the Hellenic F-16s are equipped with the AN/APG-68 radar. The older Block 30 and 50 have the V(3) and V(7) versions respectively, while the later Block 52+ and 52M have the V(9). All are almost identical externally. The AN/APG-68V(9) radar of the Block 52+ provides both improved air-to-air and air-to-ground capabilities. These include a 30 percent increase in detection range, larger search volume and improved tracking performance, new Synthetic Aperture Radar (SAR) mode for the delivery of precision, all-weather, standoff weapons, plus improved Sea Surveillance and Ground Moving Target Indication modes. Overall, the V(9) offers about five times greater processing speed and ten times more memory compared to the previous AN/APG-68 versions.

The HAF's F-16 Block 52Ms aircraft have also received Litton's ASPIS II electronic warfare suite (Advanced Self-Protection Integrated Suite) which has been internally mounted and includes the ALQ-187 I-DIAS jamming system and improved ALR-66VH (I) RWR. This system is going to be retrofitted to the F-16 Block 52+s of the HAF by Hellenic Aerospace Industry.

From the 1970s lightweight fighter concept, the F-16 Fighting Falcon has become one of the heaviest single engine fighters through its evolution. This unique aerodynamic design became the backbone not only of the USAF but also of many other countries worldwide including the HAF. The introduction of the more sophisticated Block 52+s versions into the Hellenic Air Force arsenal alleviated it’s capabilities to operate without any limitation day or night regardless of any weather condition and attack targets farther with greater accuracy than ever before. This masterpiece of aerodynamics with its innovative characteristics has become one of the most successful fighters in the history of aviation, destined to serve many forces for years to come, including the HAF! 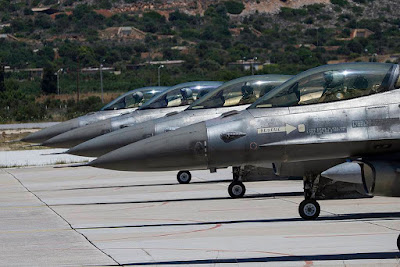 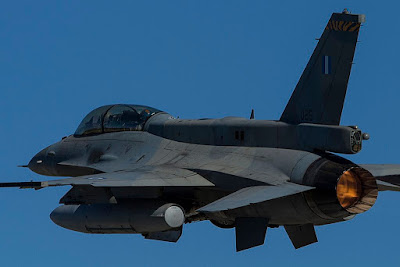 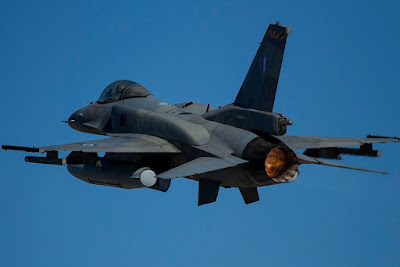 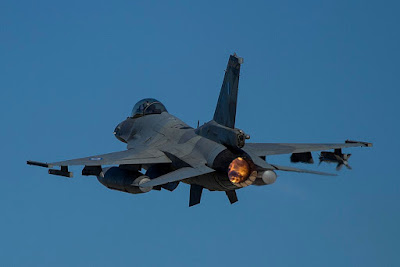 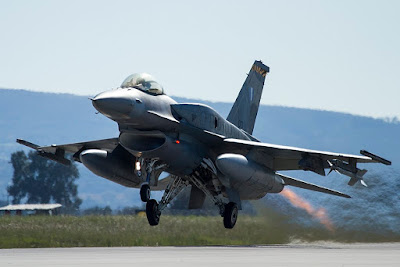 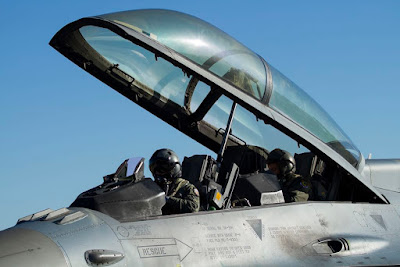 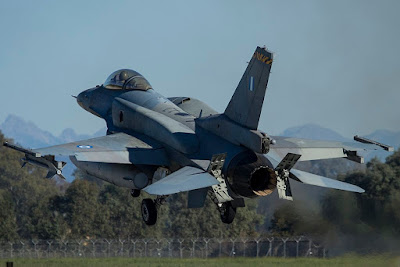 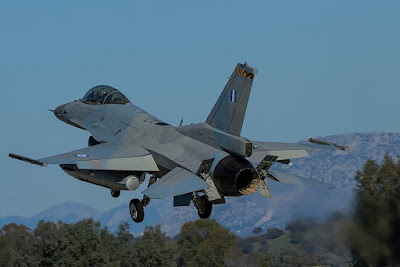 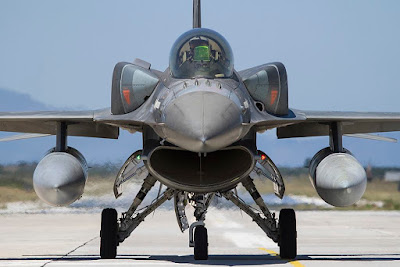 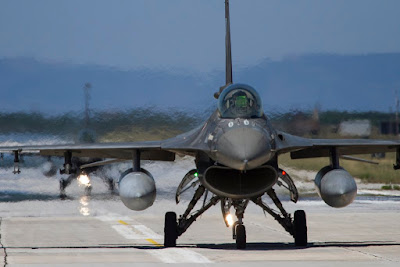 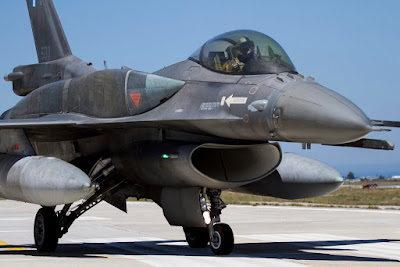 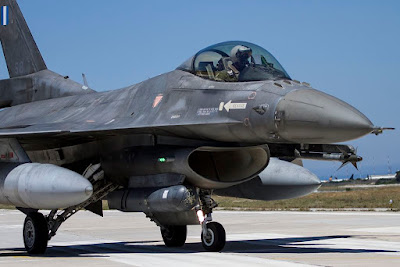 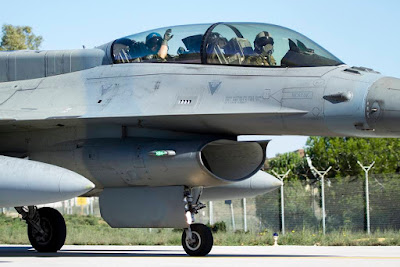 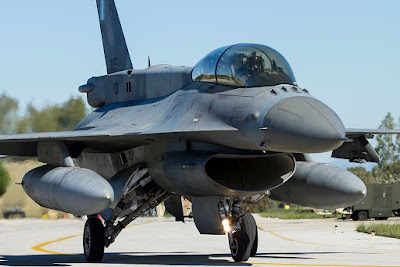 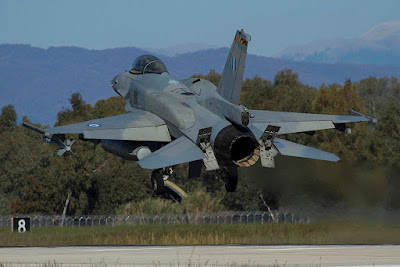 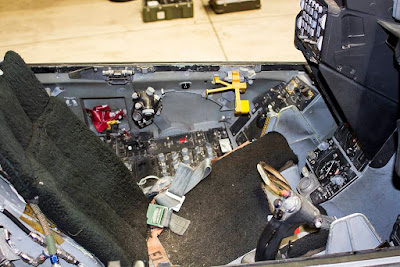 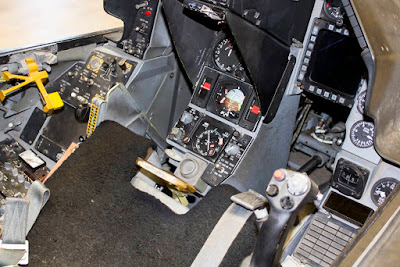 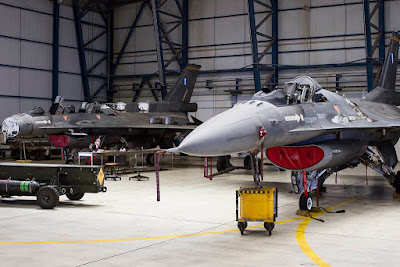 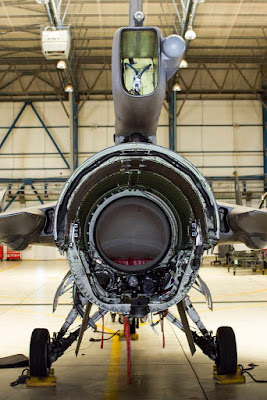