It is the world’s largest plane by wingspan, designed to release rockets that will carry satellites into space.

May 31, 2017 - The Stratolaunch aircraft was moved out of the hangar – for the first time ever – to conduct aircraft fueling tests. This marked the completion of the initial aircraft construction phase and the beginning of the aircraft ground and flight testing phase.
Over the past few weeks, the staff have removed the fabrication infrastructure, including the three-story scaffolding surrounding the aircraft, and rested the aircraft’s full weight on its 28 wheels for the first time. This was a crucial step in preparing the aircraft for ground testing, engine runs, taxi tests, and ultimately first flight.

Once they achieved weight-on-wheels, it enabled them to weigh the Stratolaunch aircraft for the first time, coming in at approximately 500,000 lbs. That may sound heavy, but remember that the Stratolaunch aircraft is the world’s largest plane by wingspan, measuring 385 ft. – by comparison, a National Football League field spans only 360 ft. The aircraft is 238 ft. from nose to tail and stands 50 ft. tall from the ground to the top of the vertical tail. 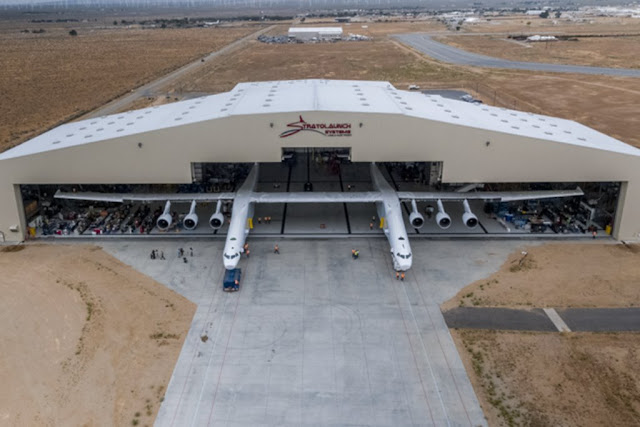 The Stratolaunch aircraft is designed for a max takeoff weight of 1,300,000 lbs., meaning it’s capable of carrying payloads up to approximately 550,000 lbs. The initially purpose is to launch a single Orbital ATK Pegasus XL vehicle with the capability to launch up to three Pegasus vehicles in a single sortie mission. Stratolauch Systems Corp. has already started preparations for launch vehicle delivery to their Mojave facilities. They're actively exploring a broad spectrum of launch vehicles that will enable them to provide more flexibility to customers.

Over the coming weeks and months, they’ll be actively conducting ground and flightline testing at the Mojave Air and Space Port. This is a first-of-its-kind aircraft, so they’re going to be diligent throughout testing and continue to prioritize the safety of their pilots, crew and staff. Stratolaunch is on track to perform its first launch demonstration as early as 2019.