Here is the report about an Air to Air Refuelling (AAR) mission.


On October 12, 2016, the Staff of Blog Before Flight was invited by the 14th Wing of the Italian Air Force to take part in an AAR (Air to Air Refueling) mission on board a Boeing KC-767A tanker aircraft. The activity was organized in occasion of a flight training that included many "receivers". Early in the morning we entered the main gate of Pratica di Mare AB, Rome, where we received a warm welcome from the P.A. Officers. They accompanied us during all the activities of the day explaining in detail the tasks of the Wing.

After completing the security checks and the pre-flight briefing, we reached the operational area and immediately we were attracted by the giant shapes of two tankers parked a few hundred meters in front of us. The Officers directed us to the one serialled MM6228 (14-03), setted in the COMBI variant (cabin set up for freight and passengers). Before boarding, we walked around the aircraft, it was the first time we saw it closely. All four KC767s of the Italian AF are equipped with four refueling points: three hose-and-drogue and one boom. The two drogues installed inside the wing pods are capable to deliver up to 1,818 liters per minute at 50 psi, while the central drogue up to 2,727 liters per minute at 50 psi, and the boom up to 4,091 liters per minute at 50 psi.

Our flight took off at 10 AM for a 6-hour mission during which 18 aircraft were refueled: 9 Eurofighters, 4 Tornados, 4 AMXs and 1 KC767. Some of them were really unusual: a rare two-seater Eurofighter belonging to the 4th Wing, a Tornado IDS belonging to the 154th "Red Devils" Squadron with the panther footprints painted on the fuselage (the usual ones of the 155th "Black Panthers" Squadron), and a second "Red Devils" Tornado IDS numbered 6-66. All aircraft performed "wet contact", ie with fuel transfer (Some missions are carried out with "dry contact", no fuel supplied). The operations have had a variable duration based on the quantity of fuel requested by the receivers.

All activities were carried out by the on-board operator through the RARO II operating station (Remote Air Fueling Operator Station), which is equipped with monitors, joysticks and controls to guide the boom through the HMD (Head Mounted Display) system, it is a viewer able to transmit 3D images taken from external cameras.

All aircraft performed a "rendez-vous" Alpha (approach mode). They arrived from the left of the tanker to be identified and after receiving the authorization from the tanker commander, they carried the left probe (the only operational one) to start the approach and the refueling. At the end of the operation the receivers moved to the right of the tanker and then started the exit maneuver. The last aircraft to receive gas was a second KC767, it was fueled by the boom as it is equipped with UARRSI (Universal Aerial Refueling Receptacle Slipway Installation). All fighter jets refueled on the sea, while the KC-767 on the Apennines. During the rendez-vous the tanker maintained an elliptical route. 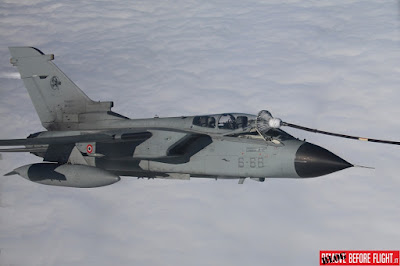 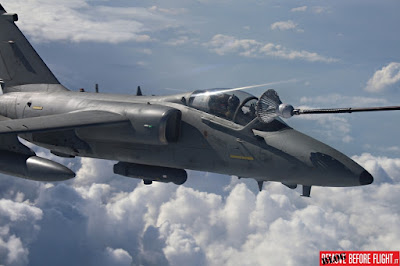 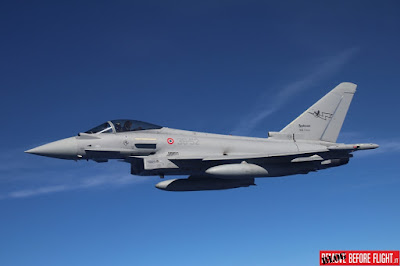 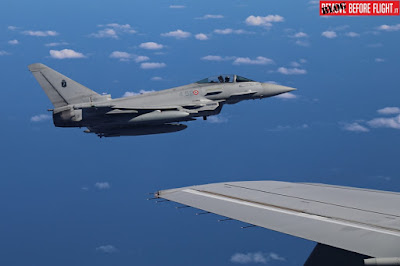 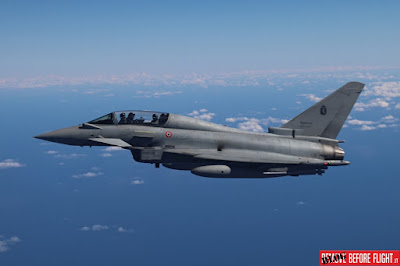 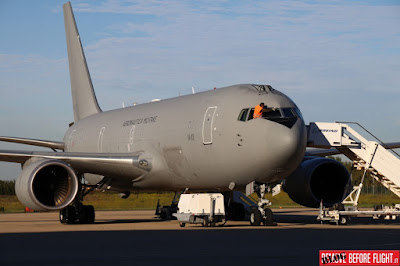 In July 2001, the Italian Air Force (ITAF) ordered four 767 tanker transports in the combi variant. The maiden flight of the first aircraft took place in May 2005. The first KC-767A was delivered to the ITAF in January 2011 and the second one in March 2011. These two KC-767A tankers entered service in May 2011. The third and fourth aircraft were upgraded by incorporating new features to improve their capabilities. The upgraded aircraft were delivered in the last quarter of 2011.
All four tankers replaced the elderly B-707 T/T fleet and are stationed at Pratica di Mare AB.

ABOUT THE 14th WING

Thanks to the arrival of the Boeing 707s, the Wing began to participate in major international operations such those as in Bosnia, Albania, Zaire, Somalia, East Timor, Kosovo, Libya, Afghanistan and Iraq; and one of the Boeing 767 aircraft is currently operating as Task Group 'Breus' at Abdullah Al Mubarak airport in Kuwait, carrying out refuelling operations in support of the MESF Coalition (Middle-East Stabilization Force) mission in the fight against Islamic State (IS) forces.