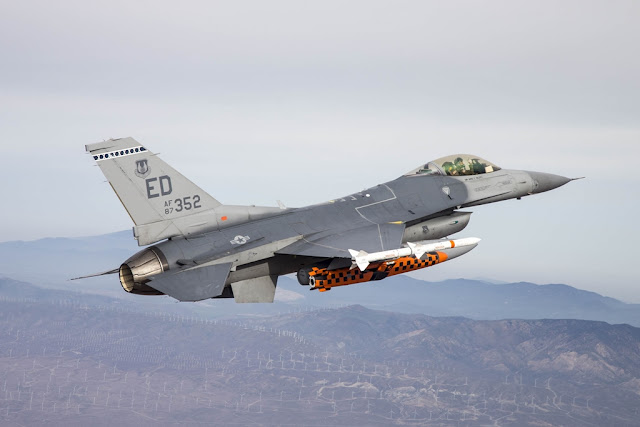 From Norway to Australia, members from a number of allied and partner nations have come to Edwards AFB to team with base units to test systems, enhance international cooperation and advance their own air forces’ capabilities.
At the 416th Flight Test Squadron, a team of U.S. Air Force engineers and pilots are working with Norwegian government and industry personnel in testing the Joint Strike Missile. The JSM is designed to be carried in the F-35A’s internal weapons bay and is the only powered, anti-surface warfare missile to do so according to Norwegian officials, said James Cook, 416th FLTS JSM program manager.
The JSM is an advanced missile made of composite materials and uses stealth technology. It has air intakes, fold-out wings and tail fins. The navigation system supports terrain-following flight and can be used against sea- and land-based targets.
Before it can be integrated with the F-35A, it is being tested on F-16 Fighting Falcons from the 416th FLTS. The F-16 provides an excellent platform to initially test the missile before it’s transferred to the F-35 fifth-generation fighter, test managers say.
“What we’re doing is conducting risk-mitigation testing with the F-16 before the JSM is integrated on the F-35,” said Cook.
All tests are conducted over the Utah Test and Training Range.
“I think it’s awesome to be a part of the next generational fighter while being in a legacy fighter combined test force. I’m excited to see the final outcome, which will be the culmination of all we’ve done here. To see it hit the target and explode the way it was planned to do,” Cook said.
Along with Cook, the JSM team consists of test pilots Maj. John Trombetta and Maj. Jameel Janjua (Royal Canadian Air Force), flight test engineers Eric Biesen and Tom Smeeks and Collin Drake, project engineer.
The JSM program at the 416th is one project that falls under the squadron’s European Participating Air Force Program, which Cook manages. The squadron conducts tests for European customers when requested.