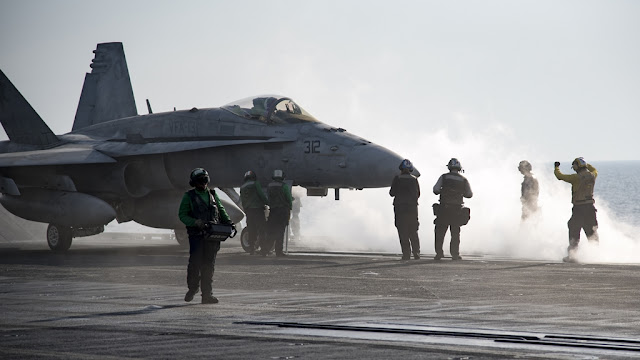 This marks the first time a Royal Navy officer has led a U.S. task force in the Middle East and demonstrates a significant step in combined maritime operations.
A helicopter carrier and amphibious assault ship, Ocean is the flagship of the Royal Navy and will be providing continued forward presence in the Arabian Gulf. Capable of delivering Sailors and Marines by helicopter or landing craft, this premier naval warship brings its own unique capability of ensuring free flow of commerce, freedom of navigation and regional security.
The change-of-command ceremony took place onboard USS Dwight D. Eisenhower (CVN 69) (IKE). During the ceremony, Burns assumed command of CTF 50 from U.S. Navy Rear Adm. James Malloy, commander of Carrier Strike Group (CSG) 10.
Burns said this assumption of command by the Royal Navy is a significant development in the longtime U.S.-U.K. partnership.
"Together we have had an enduring presence in this region that has contributed to stability, order on the high seas and freedom of navigation, and ensuring the free flow of commerce, so vital to the prosperity of our respective nations," said Burns. "Today marks the start of another chapter in this partnership as the Royal Navy takes on the privilege of leading a U.S. task force in the Middle East for the first time." 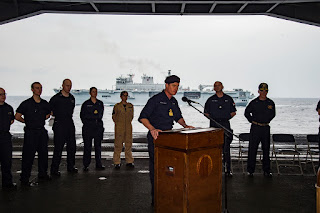 Ocean will provide a range of flexible and adaptable capabilities to perform theater security cooperation efforts and maritime security operations aimed at providing continued presence following IKE's departure out of the U.S. Central Command area of responsibility.
Malloy said the handover of the CTF 50 to the Royal Navy, "represents a wise investment in this region's future."
"Hearing of his sterling reputation long before meeting him last month, I cannot think of a more capable officer and friend to continue the mission out here than Commodore Burns," Malloy said. "Security and stability cannot be maintained by one nation alone. Working together with our U.K. and other coalition counterparts, I am confident in the success of our shared interest for security, stability and prosperity in this region." 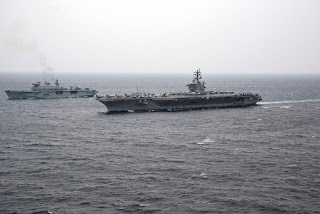 Carrier Air Wing (CVW) 3, embarked on IKE, completed 1,770 combat sorties, delivering 1,903 ordnances from both the Mediterranean Sea and Arabian Gulf in support of Operation Inherent Resolve in the fight against ISIL.
U.S. Naval Forces Central Command is responsible for approximately 2.5 million square miles of area including the Arabian Gulf, Gulf of Oman, North Arabian Sea, Gulf of Aden and the Red Sea.