November 25, 2016
On November 16, the presentation of the HD.21 Super Puma helicopter took place. This aircraft is being incorporated into the 46th Wing, and the event was held at 11:00 at Gando Air Base in Gran Canaria. 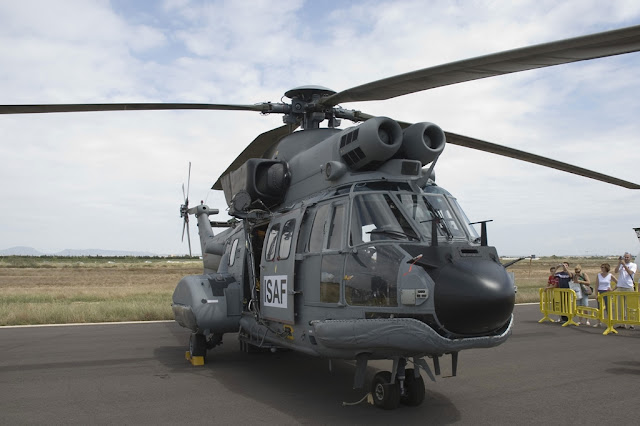 It was presided over by the second in command of the Canary Islands Air Command, Brigadier General Julián Roldán Martínez.
This will be the first model AS332 C1 aircraft that the Air Force has acquired, and it has much in common at the level of logistics with the other versions of the Super Puma family that have already been operative for many years.
This new model incorporates some important improvements, such as digital multifunctional screens, and an advanced four-axis autopilot system that offers great stability under difficult operating conditions.
The Eurocopter (now Airbus Helicopters) AS332 Super Puma is a four-bladed, twin-engine, mediumsize utility helicopter developed and marketed by Aérospatiale and Eurocopter (now Airbus Helicopters). It is an enlarged and re-engined version of the original Aérospatiale SA 330 Puma. First flying in 1978, the Super Puma succeeded the SA 330 Puma as the main production model of the type in 1980; since 1990, Super Pumas in military service have been marketed under the AS532 Cougar designation. The AS 332 is being deployed in the Combat Search and Rescue (CSAR) role which may be carried out by a task force of helicopters, ground-attack aircraft, aerial refueling tankers and an airborne command post.