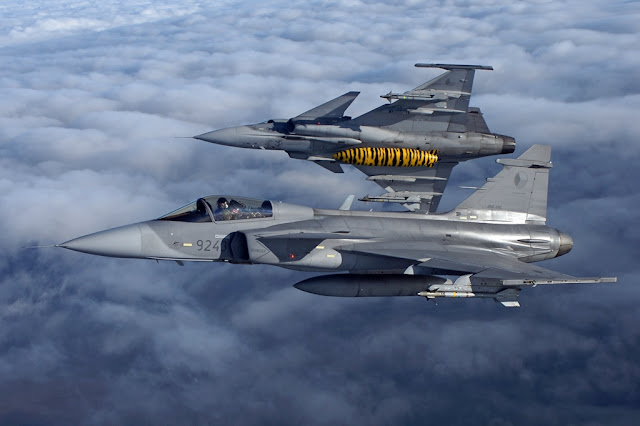 The Gripen pilots executed joint missions with the Danish patrol boat Thetis, the French frigate Languedoc and the Icelandic Coast Guard ship Thor, as well as the vessels’ on-board helicopters.
"We were invited to participate in this exercise, which took place at sea some 80 km southwest of Iceland,” said Czech detachment commander in Iceland, Lieutenant Colonel Jaroslav Tomana. "The primary task of our pilots was to perform a simulated assault on the Languedoc, one of the newest ships of the French Navy. Ships of this class are adequately equipped against attacks from the air. So our Gripens were used to challenge the readiness of the crew,” he added.
Low-level flying manoeuvres over sea were another rare training occasion for the Czech fighter crews. "Our pilots were able to hone their skills with this important proficiency,” said Major Tomas Merta, one of the participating pilots. "Per se, our Gripen jets have a minimum flight level over sea of 30 metres. However, coming from a land-locked country we are not that experienced in this specialty. For safety reasons we therefore applied a minimum flight level of 100 metres.”
The whole air-maritime training was hugely beneficial for both air and naval crews. The sailors practiced defence against airborne attacks while fighting a simulated on-board fire. They also conducted evacuation drills with ships, helicopters and speedboats. Meanwhile, the pilots learned what it meant to act against and with the maritime assets.
The Czech JAS-39 Gripen detachment will continue to execute the NATO peacetime mission, demonstrating Alliance solidarity and resolve, in the High North until the end of October. Following this mission, they will rejoin their fellow Gripens at home, to help them ensuring safety and security over the Czech airspace.