On December 9 2020, the French Directorate General of Armaments (DGA) along with MBDA and Dassault successfully carried out the first test launch of the updated ASMPA (air-sol moyenne portée amélioré) nuclear missile.

This development launch was performed for MBDA, which acts as prime contractor, from a Rafale fighter jet operated by Dassault Aviation. The test firing was supported by the French Navy and the French Air and Space Force .Throughout the flight phase, the missile was monitored by DGA Essais de missiles in Biscarosse, Hourtin and Quimper, with the participation of DGA Essais en vol.

The ASMPA is a supersonic cruise missile carrying a nuclear warhead. It is part of France’s airborne nuclear component. The ASMPA was initially used on the Mirage 2000N-K3 fighter-bomber until 2018, before being integrated on the Rafale F3R. The missile entered ervice with the French Air Force in 2009 and with the French Navy in 2010. 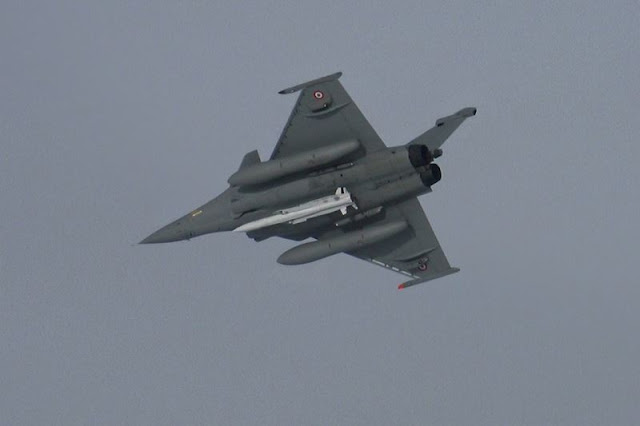 France launched in December 2016 the ASMPA mid-life upgrade program. The objective is to anticipate obsolescence and to improve the missile performances. To this end, the DGA benefits from the support and expertise of the French national aerospace research centre ONERA, already involved on the previous version.

The updated ASMPA will be the next strategic missile operated by the Strategic Air Force (FAS) and the Nuclear Naval Aviation Force (FANu).

This manufacturer test firing allow the completion of the detailed design phase and announce the launch of the qualification phase in 2021 and of the series production. A qualification firing will be carried out between now and the entry into service, under the responsibility of the DGA. Once this second test launch achieved, French Navy and French Air Force will then be allowed to perform training firings.

The ASMPA will ultimately be replaced by the future ASN4G strategic missile, in development with the DGA.
Source, Images: French Ministry for Armed Forces
Industry Rafale