Stavatti responds to US Navy RFI for new jet trainer

After the previous news about India's response to the US Navy's RFI for a new jet trainer, we publish another "unexpected" participation in the project. It concerns the proposal submitted to the US Navy by the Stavatti Aerospace company, which had also participated in the USAF T-X Program.

On 13 July 2020 Stavatti submitted a response to the US Navy Undergraduate Jet Training System (UJTS) Request For Information (RFI).

The Stavatti UJTS solution consisted of a non-developmental, single engine, two seat tandem Undergraduate Jet Trainer, Advanced Trainer and Ground Attack Aircraft. The aircraft will feature Martin Baker MK18 or ACES 5 zero-zero ejection seats, a JPATS Category 1-8 compliant cockpit and a single Honeywell F124 turbofan powerplant. The aircraft will be equipped with a carrier suitable arresting hook and will be capable of being launched by catapult from a Nimitz/Gerald R. Ford class carrier deck. The Stavatti UTJS will feature advanced aluminum lithium and scandium aluminum alloys throughout, benefit from Friction Stir Welding (FSW) and has a proposed unit flyaway cost in the $15 Million class. Benefiting from advanced production techniques, enhanced reliability systems, systemic Built-In-Test (BIT) and an Open Avionics Architecture (OAA), the Stavatti UTJS has a projected Cost Per Flight Hour (CPFH) of $4,052 with 2.95 MMH/FH.

Addressing a potential need to replace up to 220 USN T-45A/C Goshawks on a one-for-one basis, the non-developmental Stavatti UJTS solution may enter production and begin deliveries as early as 2021. The Stavatti UJTS will be produced at a Stavatti aircraft manufacturing plant in the USA in full compliance with the Buy America Act being 100% “Made in the USA.”

In addition to the non-developmental Stavatti UJTS solution, Stavatti can also offer the SM-28N Machete and the SM-31N Stiletto as potential alternative solutions to the UJTS requirement. The SM-28N is a navalized, advanced jet trainer variant of the single engine, two seat tandem SM-28T Machete Close Air Support (CAS) aircraft. The SM-28N will feature carrier suitable arresting gear, electromechanically actuated folding wings and a single non-afterburning F414 derivative powerplant. Sharing powerplant component and systems commonality with the F/A-18E/F, the SM-28N will have a flyaway cost in the $20 Million class with an estimated CPFH of $4,000 and 6.56 MMH/FH when equipped with a 30mm GAU-8 cannon and comprehensive ECM systems. The SM-28N is anticipated to be available for production deliveries in 2024-2025 meeting the USN requirement to have a non-developmental UJTS solution before 2028. 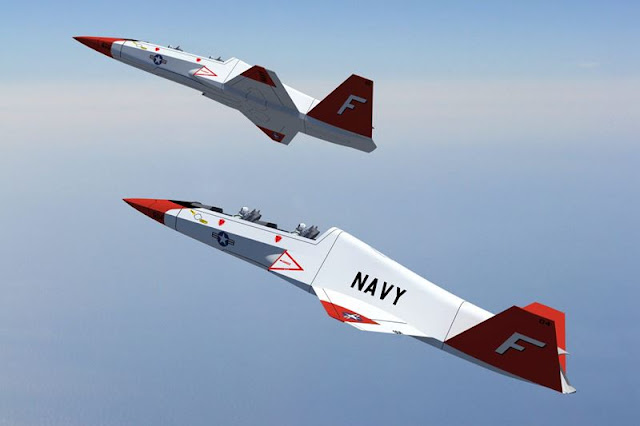 The SM-31N is a navalized, advanced supersonic trainer variant of the single engine, two seat tandem SM-31T Stiletto Supersonic Trainer and Light Weight Fighter aircraft. The SM-31N will feature carrier suitable arresting gear and a single F125 derivative afterburning turbofan powerplant. The SM-31N will have a flyaway cost in the $17 Million class with an estimated CPFH of $3,204 and 3.46 MMH/FH. The SM-31N is anticipated to be available for production deliveries in 2024-2026 meeting the USN requirement to have a non-developmental UJTS solution before 2028. Stavatti has secured Letters of Intent (LOIs) for the delivery of over 60 SM-31 Stilettos by US Allied Air Forces and was awarded the Design Patent for the SM-31 by the USPTO on 23 July 2020.
Source, Images: Stavatti Aerospace
Industry US Navy