December 02, 2020
On 1 December 2020 the Italian Air Force' Military Flight Training School at Galatina AFB, southern Italy, turned 25 years old. The military airport of Galatina was born as a "makeshift camp" on March 31, 1931. Since 1946 the base has been used as a flight school but it is from December 1, 1995 that it is named and configured as a Wing, receiving the number "61" from the previous Air Brigade. Today the 61st Wing has more than 200,000 flight hours and nearly 700 military pilot's licenses awarded to Italian and foreign students.

In the last quarter of a century, the 61st Wing has undergone an unstoppable process of growth and change in a modern and international key that has led it to be a world reference point for flight training. This transformation has on the one hand introduced increasingly technologically advanced systems, on the other hand it has shifted the mission of the unit towards the training of fighter pilots. In 2015, the arrival of the first T-346A and the change of the crest marked this evolutionary process.

Today, the Galatina flight school provides flight training for the student pilots of the Italian Air Force and the Air Forces of allied and partner countries. Specifically, it deals with phase II, aimed at determining the most suitable line for each student pilot, phase III, aimed exclusively at student pilots selected for combat aircraft and for the RPA (Remotely Piloted Aircraft) line and phase IV, preparatory to transition into fighter aircraft. Training for Phase IV takes place in the advanced Leonardo's T-346A Integrated Training System.

Colonel Filippo Nannelli, Commander of the Wing and Air Base, after summarizing the amount of activity produced in the last 25 years by the flight school, underlined how "regardless of the numbers, what matters is the heart, the passion with which every day the personnel cope with work commitments. The results achieved by the 61st Wing have been possible thanks to the work and enthusiasm of the many men and women who have come and gone over the years. Today we celebrate this anniversary only in a virtual way due to the restrictions for the health emergency. What matters is having the opportunity to address a special thought to all those, especially those who have left active service, who have contributed to the success of this unit."
The 61st Wing  also received wide appreciation from the several international delegations received on visits.
"Thank you for the incredible visit and for introducing me to a team of great professionals," USAF Commander.
"It is an honor for Greece to be part of the best flight training center in Europe," Greek Minister of Defense.
"Thank you for showing me the fighter pilot training of the future," Luftwaffe Commander.
Thanks to the introduction of the M-346 and its integrated simulator, the Italian Air Force' Flight Training School has revolutionized the concept of training for fighter pilots. No armed force in the world had ever been equipped with such advanced systems before. It has become the reference point for those nations wishing to modernize their military flight schools or train their pilots abroad. With the upcoming delivery of the M-345, it will go one step further by becoming the only flight school in the world to be equipped with modern jet trainers for phases II, III and IV. 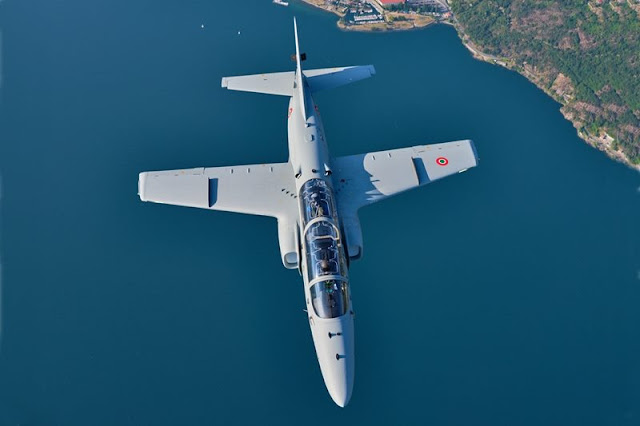