December 03, 2020
The use of the plane in battle dates back to the First World War (1914-1918) when the biplanes began to carry out the first reconnaissance missions. The pilots soon realized that they could win the enemy by firing their pistol. Thanks to this intuition, in 1915 France began to mount machine guns synchronized with the turns of the propeller on the aircraft and was immediately followed by the other nations. Thus was born the dogfight, ie close air combat, which consists in performing aerobatic maneuvers in order to bring one's aircraft behind the enemy's one in order to use short range weapons. The name derives from the circular maneuvers reminiscent of those of fighting dogs.

Initially the pilots did not use specific tactics, but over time two German aces, Oswald Boelcke and Max Immelmann, developed techniques and maneuvers still valid today. Under the "Dicta Boelcke" the first rules of dogfight have been codified, they provide for ensuring the best position before attacking (the sun behind), always attacking the enemy from behind, forming groups of four or six aircraft, attacking the same enemy with two planes.

Immelmann, on the other hand, gave his name to an aerobatic turn useful for quickly changing direction, displacing the opponent. These tactics enabled a pupil of Boelcke, Manfred von Richthofen, known as the "Red Baron", to score 80 victories.

Towards the end of World War II (1944), the Germans were the first to deploy a fighter jet, the Me-262, which could have turned the tide of air battles. This did not happen as this revolutionary aircraft entered service too late, when the Allies had already prevailed over Germany and due to the Luftwaffe pilots' lack of familiarization with the jet's high performance. Instead of taking advantage of the plane's high speed, they used the old tactics associated with the reliable Messerschmitt Bf-109s, which however had greater maneuverability. Furthermore, they were not prepared to face the consistent accelerations of gravity (G-force) which often led them to lose consciousness (G-Loc) with disastrous results. 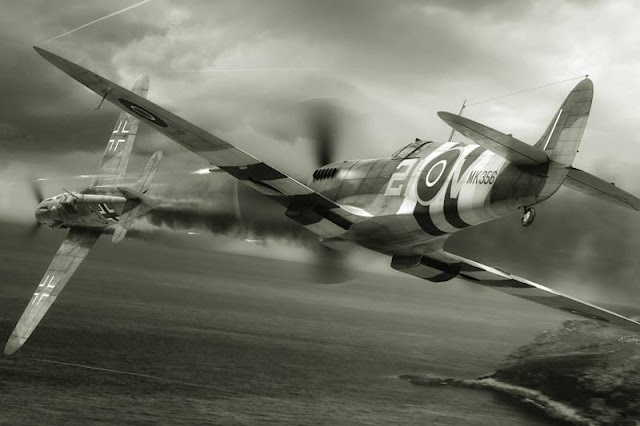 A further evolution of dogfight took place during the Korean conflict (1950-1953) which was the first to include fights between fighter jets, such as the Russian Mig-15 and the American F-86. The United States achieved a great victory thanks to the superiority of its pilots, almost all with the experience of the Second World War. North Koreans lacked this experience, despite the support of Russian instructors.
The next turning point came in the early 1960s, when the two superpowers deployed air-to-air missiles with infrared and radar guidance as main weapons instead of cannons. During the Vietnam War (1965-1975), the US suffered greatly during Operation Rolling Thunder (1965-1968), which involved intensive bombing of the civilian and military infrastructure of North Vietnam. The operation was a serious failure for the nation due to the tough resistance of the anti-aircraft and enemy fighters.

The number of aircraft shot down by the United States dropped dramatically since the Korean War, so the US Navy decided to establish the United States Navy Fighter Weapons School, known as Top Gun, in 1969. The school, part of the Naval Strike and Air Warfare Center since 1996, teaches advanced dogfight tactics. Top Gun instructors, acting as “agressors”, simulate the behavior of opposing pilots by flying agile jets painted with the camouflage schemes of the enemies.

The USAF has also set up "aggressor" squadrons that it deploys during the "Red Flag" exercise, scheduled for one or more times a year since 1975 at the Nellis Air Force Base, Nevada. Other countries also have similar schools, such as Russia, where training currently takes place at the Lipetsk air base about 500 kilometers from Moscow.

From the Vietnamese conflict to the end of the Cold War, except for rare occasions, air combat has been limited. Technological innovations and strategic-tactical adjustments have further reduced the importance of dogfight, just think of the "Desert Storm" operation in Iraq (1991). Coalition forces did not struggle to impose their air superiority with missile attacks on command and control centers, combined with missions to suppress anti-aircraft defenses.
Despite this obvious trend, Russia still focuses on the "supermaneuverability" of its fourth generation fighters, with new versions of the Mig-29 Fulcrum and Sukhoi Su-27 Flanker family models. The Russians have invented some impressive aerobatic maneuvers, such as the "Cobra" and "Kulbit", the latter only possible for aircraft equipped with vector thrust. The US, on the other hand, has focused on stealthness, developing the F-22 Raptor and the F-35 Lightning II.

The importance of dogfight has diminished over the years and the likelihood of such an aerial battle is minimal. The development of drones, advanced surface-to-air missiles, increasingly effective stand-off weapons, electronic warfare and stealth technology make a difference in the modern battlefield and help avoid dogfight.
Written by Matteo Sanzani
Photo Credit: USAF (The first)
Highlights