August 15, 2020
The 63rd Fighter Squadron recently implemented the Beast Mode weapons configuration on its F-35s during training sorties. The Beast Mode configuration consists of six inert 500-pound GBU-12 laser-guided bombs, four loaded externally on the wings and two internally in the weapons bay, as well as an AIM-9 training air-to-air missile.
“It’s important for our student pilots to have some exposure to flying this really unique configuration because when they are in a combat situation they will fly a very similar configuration to the one they’re doing right now,” said Lt. Col. Peter Cossette, 63rd FS director of operations. “There are often times where they will take off, fly a combat mission and have to come back and land with those heavy-weight munitions. That presents an extra challenge that a lot of student pilots never get to experience until they are put into a combat situation. We want to give them that exposure here first.”

Cossette said the F-35A can be loaded with a wide variety of weapons configurations.

“We can set the aircraft up for a stealth air-to-air configuration where all of our munitions are loaded internally or there are other situations where we need to go to war with a heavy amount of munitions,” he said. 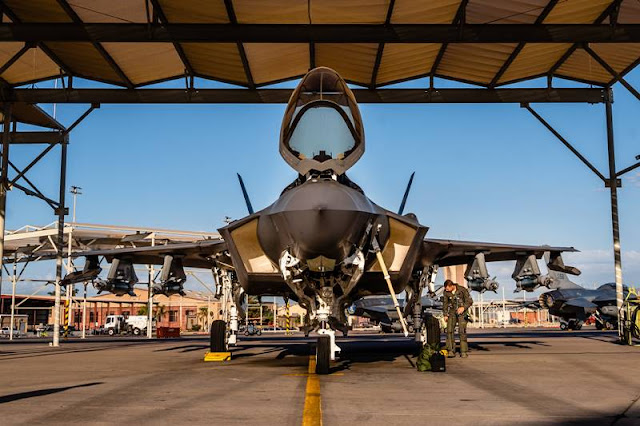 The Beast Mode configuration enables the student pilots to understand how the F-35A will respond while carrying a heavy load out on a combat mission.

“Even though the F-35 is an incredibly powerful aircraft, when you strap on six heavy weight laser-guided bombs and missiles, it flies dramatically different,” said Cossette. “When our student pilots are given that responsibility, it provides a unique opportunity for growth.”

According to the B-Course training syllabus, student pilots are required to drop heavy weight inert munitions, but the syllabus does not mandate a specific weapons configuration. Cossette explained that instructors who have flown the F-35 into combat helped tailor the syllabus to create more relevancy in the training program.

“Seeing the inert missile hit the target and have everything go according to plan gives you a sense of confidence that you normally wouldn’t get from using electronically simulated munitions” said 1st Lt. Joshua Shook, 63rd FS F-35 B-Course student pilot.

While the added configuration has created unique learning opportunities for flying operations, it has also enabled the 63rd Aircraft Maintenance Unit Airmen to gain more experience in loading munitions.

“One of the biggest takeaways of how Beast Mode has helped our unit is getting our Airmen the experience needed for combat-coded bases,” said Capt. Christopher Burson, 63rd AMU officer in charge.

Weapons load crew members assigned to the 63rd AMU complete weapons certification training every 60 days to maintain proficiency in loading munitions. Burson said the frequent implementation of the Beast Mode configuration has amplified their training and experience, preparing the unit for future assignments.

“We’re constantly farming out our personnel to F-35 units being stood up at other bases,” said Burson. “If we can get them the experience here first, then their gaining units will be that much better.”
Source: 56th Fighter Wing Public Affairs
Images: USAF/Staff Sgt. Alexander Cook
F35 USAF