Italy is the first Ally to deploy F-35 fighters at Keflavik air base and to deploy the fifth-generation aircraft in NATO's air defense mission.


On September 25, 2019, the Italian Air Force deployed 140 soldiers and six F-35 fighter planes at Keflavik International Airport to take over the defense of Icelandic airspace under the NATO Air Policing mission. The aircraft come from the 13th Squadron based at the 32nd Wing, Amendola AFB, Italy. During their trip, the modern stealth aircraft were accompanied by a KC-767A tanker, a C-130J and a P-72A Maritime Patrol Aircraft.

During the coming days, Italian fighter pilots will conduct familiarization flights before obtaining operational certification. The F-35 mission in Iceland will also include approaching practices at Akureyri and Egilsstaðir airports between September 26 and October 4. 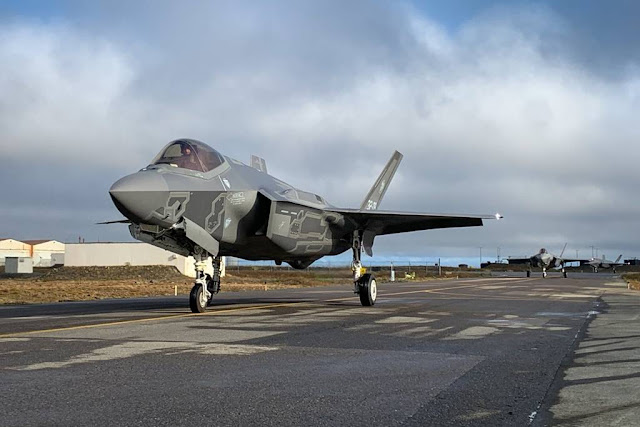 This marks this year's second deployment of Italian fighter jets in Iceland and the first F-35 involvement in the NATO Air Policing mission. In addition to supporting the Nordic Ally, the mission offers a valuable training opportunity for the Italian Air Force, whose crews will practice in a unique geographical location and boost their skills to operate in an unfamiliar airspace.

Iceland does not have a full range of air defence assets, so this mission is executed by other NATO Allies. This ensures that Icelanders enjoy a high standard of airspace security.

The involvement of F-35s in NATO's air defense mission confirms the intention of the Italian Air Force to use the fifth-generation aircraft also as an interceptor and not only for ground attack tasks.

👉 You may also like: Italian Typhoons safeguard Icelandic airspace under NATO deployment