Jan Slangen, 43, was one of the most charismatic and respected commanders of the Italian aerobatic team Frecce Tricolori. He was part of the team for eight years, from 2012 to 2016, first as formation leader and then as commander. Slangen said that at some point he had to leave the aerobatic flight to safeguard his body from possible damage caused by strong stresses. "The pilots of the Frecce Tricolori reach a gravitational acceleration of even 6 or 7G positive, it means that the body acquires a weight six or seven times the real one - Slangen said - you feel crushed, the blood flows towards the legs and the brain receives less oxygen. After a flight of 25 minutes, you have broken capillaries and you are destroyed like a 200-meter runner."

After the experience in the Frecce Tricolori, he was assigned to an office task, sitting at a desk, but Slangen said he missed the sky, so he decided to fly again, as a pilot of airliners. "It was not easy," he admitted, "I spent 25 exciting years with the Aeronautica Militare (Italian Air Force). One day, however, I looked at myself in the mirror and saw that my eyes did not shine with the light they have always had." 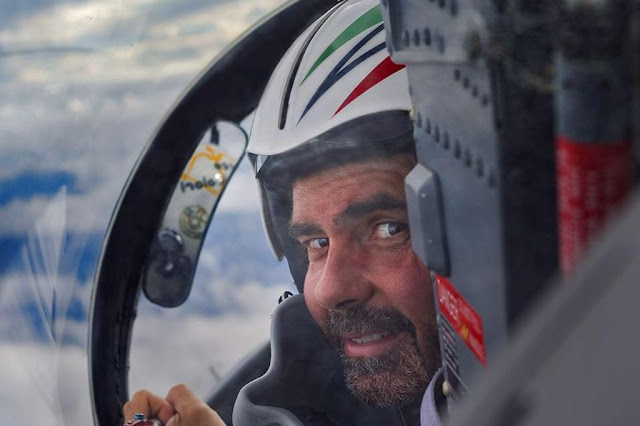 During an interview with an Italian media outlet, he said that the light derived from the pride of painting the sky with the Italian flag and representing the nation and the ability of all the armed forces. Moreover he felt the lack of work in the team that made him a better man. "When you fly just two meters from other planes, you need to have total confidence in your mates." This trust is symbolically represented by the handshake between colleagues after landing, it simbolically means "I put my life in your hands and you put yours in mine". Slangen said it was very important to know all the team members very well. "In the morning we looked into each other's eyes to see if one had slept well, if he had a problem that could affect performance and we could solve together."

Today Slangen, as a civilian pilot, has a less stressful job for the body, but always of great responsibility. Every day hundreds of passengers entrust their lives to him and to the Ryanair team, but we are sure that they are in good hands. Recently Slangen also wrote the book "Volare alto. Appunti sulla felicità di un pilota delle Frecce Tricolori (Flying high. Notes on the happiness of a Frecce Tricolori pilot)" published by a well-known publishing house.