March 11, 2019 - The exercise Red Flag 19-2 just started at Nellis AFB, Nevada (USA), marks the first participation of a F-35A multinational unit that includes officers from USA, Italy and Norway, we are talking about 62nd Fighter Squadron based at Luke AFB. The 62nd FS belongs to the 56th Fighter Wing and has the task to train pilots and instructors on F-35A.

This RF session also marks Italy's first participation in the advanced aerial exercise with the F-35 stealth aircraft. The modern fighter jet will be the main player and fundamental enabler of the complex scenarios of the Red Flag, which include advanced and modern air and land threats, and where mission objectives can only be achieved through high interoperability, integration and synergy between the fourth and fifth generation aircraft involved.

"The F35 is able to see where aircraft of previous generations do not see," Maj. Giuseppe A., one of the Italian instructors participating in the exercise, said. "The F35 is able to counter and eliminate advanced threats that are not able to see us; at the same time this information can be passed to allied aircraft. This feature allows us to face threats with the use of fewer assets compared to the past. This is what we expect in Nellis." 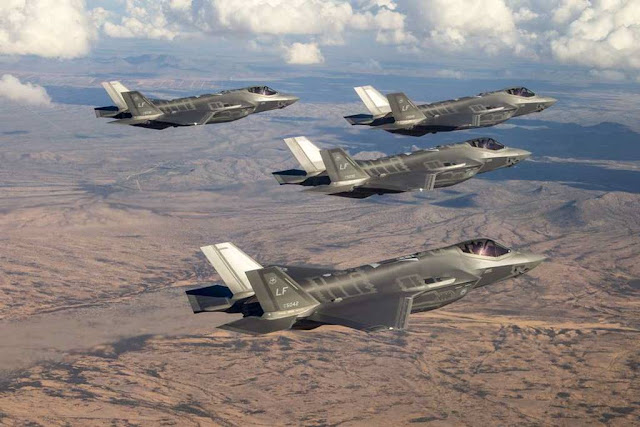 The Red Flag aims to operate the aircraft jointly, consolidating the capabilities of the systems involved and validating the respective operational tactics with emphasis on the integration between the assets. With reference to the engagement of the F-35A, Italian pilots will play leading roles, conducting tactical leader missions. There will be more than 60 planes in flight at the same time, including: F-35A, F-15E, F-15C, F-15SA, F-15SE, F-16A MLU, F-16E Block 60, E/A-18G, B-1B, KC-135 Tanker, E-8 JSTAR, EA-3C AWACS, MQ-9, HH-60, HC-130J and KC-767 Tanker.

"Italian participation also has a further relevance: the long and delicate organization of the exercise for the 62nd Fighter Squadron was assigned, for the first time, to an Italian instructor, Maj. Alessandro P. It is a clear sign of the recognized professionalism of our pilots at the international level," Col. Igor Bruni, Commander of the Italian Military Representation, said.

The Pilot Unit at Luke AFB, Arizona, reports to the Italian Military Representative of Eglin, Florida, which headed to the JSF Program Directorate of the General Secretariat of Defense, which handles the training of all Italian military personnel (pilots, technicians and maintainers), both of the Air Force and of the Navy, designated to operate on the national F-35A and F-35B fighters.