The former 56th Fighter Wing flagship F-16 Fighting Falcon, tail number 89-2056, got a paint job and it’s taking its new look to the skies above Luke Air Force Base, Ariz.

Per Air Force Instruction, only one aircraft is allowed to carry the lead 56th FW tail, and that title belongs to an F-35A Lightning II, tail number 12-5056. However, an exception was made using heritage approval guidance.

“Aircraft 89-2056 served as the wing’s flagship from 1993 until 2015, when the F-35 was designated as the flagship,” said Chief Master Sgt. Jonathan Veal, 310th Aircraft Maintenance Unit superintendent. “With its rich history as the commander’s aircraft and flown by several commanders, who went on to be senior leaders across the Air Force, it was the obvious choice to designate as the wing heritage flagship.”

The current paint scheme of most F-16s is subdued. However, the new look takes the jet back to its 1978 roots when the F-16 was first in service.

“We added the colored thunderbolt tail flash on the top of the aircraft, a black and white shadowed tail flash, color patches of all squadrons operating at Luke, as well as several other colored aircraft markings to make it stand-out,” Stachowski said. 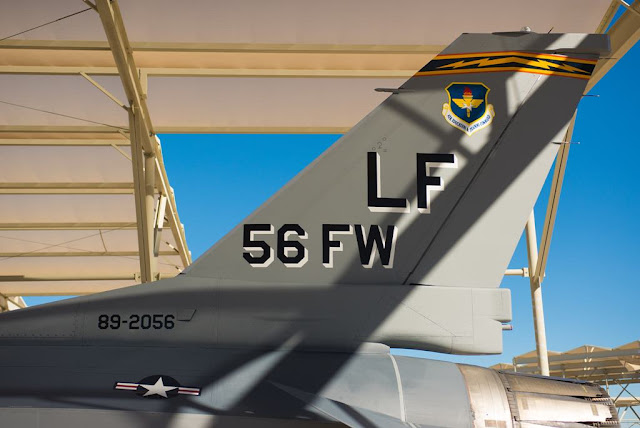 The paint job took three days to complete, but the project was in the works for months and involved a team of 16 Airmen taking the process from idea to fruition.

“When the F-35s came to Luke a lot of attention was diverted away from the F-16. We wanted to show the 56th Fighter Wing and the community that no matter which aircraft you work on or fly in or what your career field is, we’re all here to train the world’s greatest fighter pilots and combat ready Airmen,” Stachowski said.