The two companies signed a Letter of Intent during "Africa Aerospace & Defence" in Pretoria to evaluate an operative configuration of the M-345 for the African market.

Leonardo and the Paramount Group signed a Letter of Intent during the “Africa Aerospace & Defence” exhibition held in Pretoria. According to the agreement, Leonardo and Paramount, will evaluate a cooperation for the development of an operational configuration of M-345 jet trainermarketed in the African market and will include the possible involvement of Paramount in the SF-260 programme and its Logistic Support services.

Lucio Valerio Cioffi, Leonardo’s Aircraft Division Managing Director, said: “we believe the African market shows great potential for the M-345 programme. We think that a collaboration with a high level partner, such as Paramount, is strategic to develop a new M-345 operational configuration for the African market. The M-345 is a basic/advanced trainer with multirole capabilities and costs comparable to a turboprop aircraft. These characteristics and more make the M-345 perfectly suited for the African market.”

The new M-345 is allows Air Forces to reduce training times and enables trainees to leverage a platform with higher performance flight characteristics than current basic/advanced training aircraft in service worldwide. Furthermore it allows to carry out the most demanding missions in the training syllabus in order to achieve high quality training at significantly lower costs.

Ralph Mills, Paramount Advanced Technologies CEO, stated: “We are very excited to launch and demonstrate our Smart Weapons Integration on Fast-Jet Trainers (SWIFT) mission system alongside the African debut of Leonardo’s M-345 jet trainer. SWIFT is focused on current threats and current customer requirements. It offers low acquisition and operation costs and is suitable for non-conventional or asymmetric warfare. It addresses the customers growing need for multi-role configuration to adapt to different mission roles without major re-configuration and extended time delay. The platform can be described as short timeframe, light combat and surveillance solution utilising the best of the best in the defence industry.” 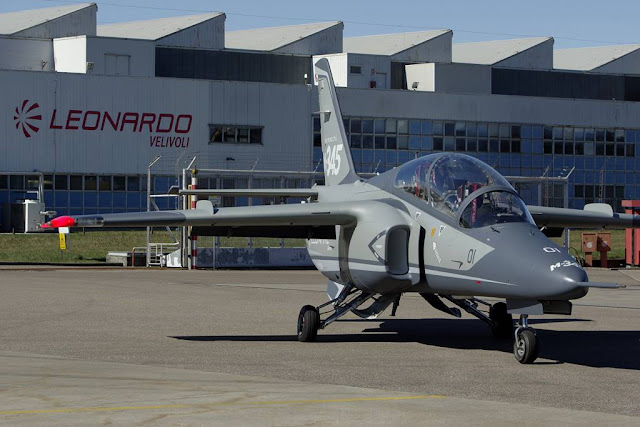 The M-345 cockpit architecture is the same as the frontline fighters. The M-345 can also perform operational roles, thanks to an extended flight envelope, with high-speed maneuvering capability even at high altitudes, modern avionics systems, high load capacity and performance.

The long life-cycle of the aircraft, the maintenance philosophy based on just two levels eliminating expensive general overhauls and the structure and system health monitoring system (HUMS) contributes to the costs reduction of M-345.

The pilot will be able to perform with higher efficiency planned maneuvers beforehand, fly in formation with other airplanes interacting in real time via data-link with other pilots both on other aircrafts in flight and on ground simulators, thanks to the sophisticated training simulator on board. Furthermore it is possible to plan the mission scenarios and then download the flight data thanks to the “Mission Planning and Debriefing Station” (MPDS) re-analyzing the missions carried out during the debriefing phase.


The engine on the trainer is a turbofan Williams FJ44-4M-34 and it is optimized for military and acrobatic use. The cockpit is based upon HOTAS (Hands On Throttle-And-Stick) controls, glass cockpit with three color MFD (Multi-function Display) touch screen and a Head-up display which is mirrored by a fourth screen in the rear seat.