The exercise is the latest training event of a successful series conducted under different names since 2008 and is hosted three times per year by a different Baltic State. Fighter jets of the three Baltic Air Policing detachments from Portugal, Spain and France, currently based in Lithuania and Estonia, participate alongside jets from Norway and Poland as well as from NATO partnership nations Sweden and Finland. Lithuania, Latvia and host nation Estonia are also contributing with command and control personnel.

"It is the interoperability of our allied and partner Air Forces that enables us to successfully secure the skies together” says Lieutenant Colonel Vincent Repolt, commander of the French Air Force detachment, currently conducting Baltic Air Policing out of Ämari, Estonia. Pilots under his command are flying training missions alongside their NATO colleagues on both days of the exercise.

Among the scenarios trained on day one was the intercept of an aircraft that lost communication with ground control. This real world scenario often requires NATO alert aircraft to launch and investigate the situation or sometimes assist. In the training scenario a Lithuanian C-27 transport aircraft simulated a loss of communication when entering Finnish airspace. Finnish F-18 fighter jets intercepted the plane and successfully escorted it out of Finnish airspace, handing it over to Portuguese F-16s scrambled from their current homebase at Siauliai, Lithuania. Other scenarios trained during the two day exercise are command and control procedures, the search and rescue of an ejected pilot as well as air to air combat. 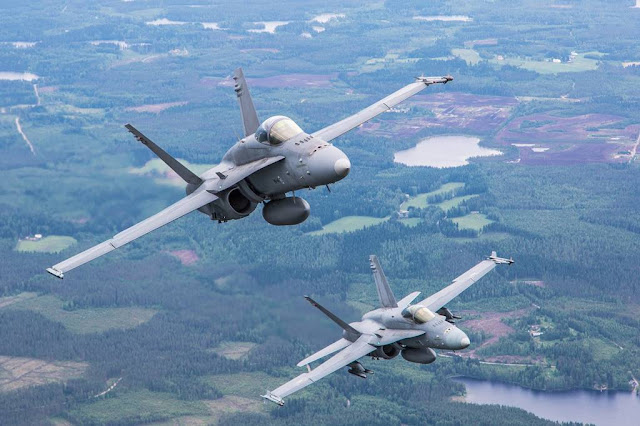 Air Policing is a routine peacetime mission conducted all over NATO to ensure the integrity, safety and security of the Alliance’s airspace. For countries that don’t have their own Air Policing capability like the three Baltic States, other Allies step in to secure the skies over the region on a rotational basis. As NATO’s Baltic Air Policing mission brings together several Allies during three rotations per year, the Ramstein Alloy Exercise series provides a recurring opportunity to train essential interoperability and maintain vital standards. All exercises of the series are planned and conducted by NATO’s Allied Air Command, the same entity that oversees all Air Policing over European NATO nations.