The F-16 Service Life Extension Program will keep the jets flying until nearly 2050.

The Ogden Air Logistics Complex has recently reached a major milestone in extending the life of one of the USAF’s most tested and flown fighter fleets through its own unit at the Hill AFB.

A Thunderbird jet is the first of what will be roughly 300 refurbished C and D model F-16’s that will roll off the shop floor of the 573rd Aircraft Maintenance Squadron after receiving multiple structure-strengthening modifications.

“As a former maintenance officer for the Thunderbirds, I can fully grasp the significance of this achievement by the 573rd AMXS,” said Brig. Gen. Stacey Hawkins, Ogden Air Logistics Complex commander. “Not only did the team increase aircraft availability for the Air Force’s most visible fighter squadron, but it paved the way for increasing combat lethality for our warfighters across the globe.”

The F-16 Service Life Extension Program will keep the jets flying until nearly 2050, thanks to a partnership between the Ogden Air Logistics Complex and the Air Force Lifecycle Management Center’s F-16 Systems Program Office. 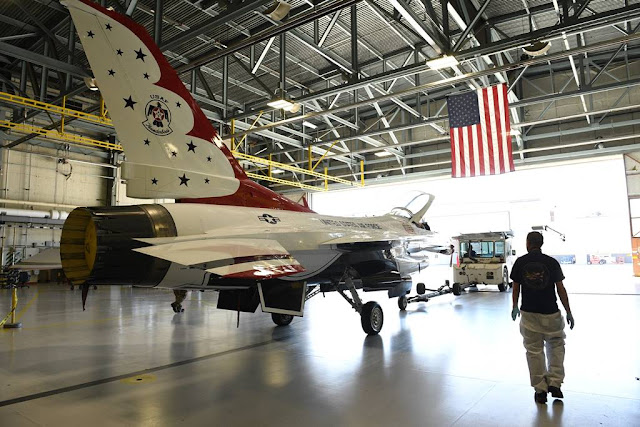 The program combines a dozen structural modifications into one repeatable package – from bulkheads to wings and canopy. The jets, which became operational in 1979, and were originally deemed air worthy for up to 8,000 flight hours, will have their life extended up to 12,000 flying hours – possibly more, said Capt. Randy Nemerson, F-16 SLEP acquisition manager.

The Thunderbird jet was the first of four F-16s that will be used as “validation and verification” aircraft. Maintainers use the challenges and lessons learned on these first aircraft to better establish the cost, workflow and timeline for the modifications.

“The Thunderbird jet presented some challenges. This is the largest structural upgrade we’ve ever done,” said Joe Gardenhour, civilian leader in the 573rd AMXS. “But we’re excited. This program moves beyond the usual modifications into a standard package of repairs, and it is going to bring stable workload into the depot for years to come.”

Once the final processes and workforce are in place, the goal is to complete each SLEP jet in 9 months at a cost of $2.4 million, a small fraction of the cost of buying a new aircraft. The F-16 SPO is also working on a separate software and technology upgrade for the F-16.

The Ogden Air Logistics Complex, with headquarters at Hill Air Force Base, Utah, provides logistics, support, maintenance and distribution for the nation's premier fighter aircraft: the F-35 Lightning II, F-22 Raptor, F-16 Fighting Falcon and A-10 Thunderbolt. In addition, it maintains the C-130 Hercules, T-38 Talon and other weapon systems.