COULD FLYING FASTER SAVE FUEL?

Two F-22 Raptors were part of a demonstration to assess if flying at an increased speed consumes less fuel while saving precious flight hours.

On a Sunday morning just outside of Anchorage, Alaska, a group of Hawaii Air National Guard fighter pilots gathered around a desk at Joint Base Elmendorf-Richardson to hear the day's operational briefing after three weeks of training at Red Flag Alaska.

As they sipped coffee and listened to the delivery control officer, they learned the mission was not difficult, but it was certainly unique.

“Good training is an absolute necessity for our combat capability, so preserving resources and hours on the airplane gives us the ability to invest those [hours] in training opportunities and time back home,” Thompson said. 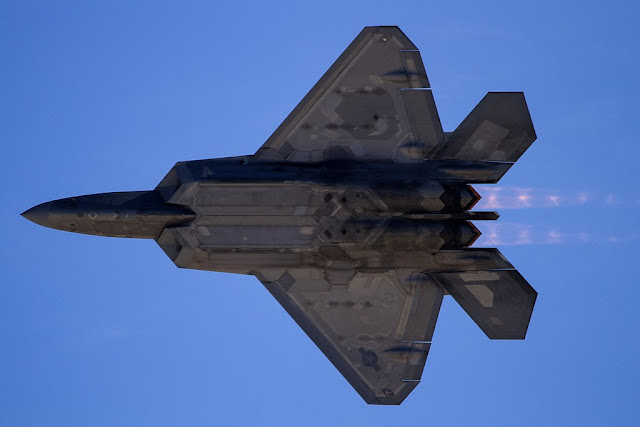 The concept of increased speed, although seemingly counter-intuitive, was first explored by the 618th Air Operations Center in 2014. They discovered that flying at a higher speed could save total fuel consumption and flight hours, but it still needed to be proven in action.

To demonstrate the concept, one cell of F-22s and an accompanying tanker for refueling, flew at a higher velocity, while the other cell flew the standard profile and acted as a control group. Throughout the five hour flight, researchers collected multiple data points in order to compare results from both cells. The faster cell was able to cut about ten percent off the total flight time and six percent of the fuel required for this type of aircraft re-deployment.

“Last year about 1250 Air Force fighter aircraft were deployed/redeployed in this manner,” said Roberto Guerrero, Air Force deputy assistant secretary for operational energy. “Smart execution like this not only saves us operational costs, but more importantly, preserves time on the aircraft for higher value sorties like combat and training".

As the largest consumer of fuel across the U.S. federal government, spending nearly $5 billion annually, the Air Force aims to increase operational energy efficiency while continuing to ensure mission success. The next step is to apply this method across other fighter platforms.

“When it comes to operational energy, it’s important to be as efficient as possible, allowing us to maximize the number of fighters we move and saving both the government and the taxpayer money while doing it,” said Lt. Col. Russell Johnson, delivery control officer from the Air Operation Squadron at Air Combat Command Headquarters.

The mission of Air Force Operational Energy is to break barriers by connecting Airmen with technology, data, and innovative thinking to develop and champion energy-informed solutions across the Air Force.