A CT-155 Hawk from 419 Squadron featured a brown and green camouflage paint scheme in honour of the unit’s 75th anniversary and its origins.

About one year ago, a Royal Canadian Air Force CT-155 Hawk assigned to 419 Tactical Fighter Training Squadron received a brown and green camouflage pattern to honor 419’s origins as a bomber squadron in the Second World War.

The call letters VR-W were in recognition of the Wellington bomber flown by the unit’s first commander, John “Moose” Fulton, a native of Kamloops. Insignia and other markings—created by 4 Wing Cold Lake, Alberta, veteran design director Jim Belliveau—tell the tale of the squadron’s bomber history flying the Vickers Wellington, Handley Page Halifax and Avro Lancaster.

The special painted trainer jet, together with other three Hawks, flew into Kamloops, British Columbia, on July 8, 2016, part of a wave of past and present “Moosemen” from 419 Tactical Fighter Training Squadron, also known as Moose Squadron, that descended on the city for the weekend. The occasion was a reunion to mark the squadron’s 75th anniversary. 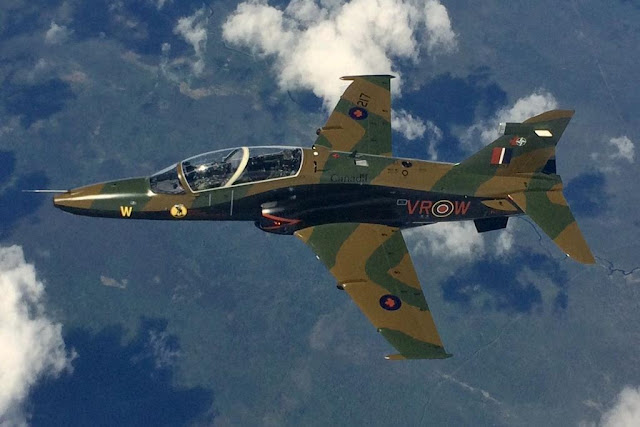 Disbanded following Japan’s surrender in 1945, 419 Squadron was reactivated in 1954 as a fighter squadron, first in North Bay, Ontario, and then, three years later, in Baden-Soellingen, Germany, as part of Canada’s contribution to NATO in Europe. Disbanded for a second time in 1962, the unit returned to active duty in 1975 as a tactical fighter training squadron on the Canadian-built Canadair CF-5 Freedom Fighter. Although the squadron was deactivated again in 1995, its training mandate endured. When it was revived in 2000, it became a core part of the NATO Flying Training in Canada (NFTC) program, a role it has continued to play through the past 16 years.

Despite those disruptions, almost every RCAF fighter pilot since 1975 has touched down at 419 Squadron, making the unit a cornerstone in the RCAF’s pilot training program.

But it is also a squadron adapting to change: a new training curriculum since 2012 and, as of October 2015, a new corporate partner for the NFTC program Canadian Aviation Electronics Ltd. (CAE), which maintains its facility, its aircraft and its simulation systems.

And more change is on the horizon. The air force has begun analyzing options for future aircrew training that will replace or incorporate NFTC and Contracted Flying Training and Support (a primary flight training program provided by Allied Wings, a consortium led by Kelowna Aircraft) in the mid-2020s. And once the government decides on a replacement for the CF-188 Hornet, the RCAF will also move forward on a new fighter training jet to replace the squadron’s fleet of nine BAE Systems CT-155 Hawks.