“The focus of the program is the cross-training and cross operation aspects that provide insight for foreign nationals to better understand U.S. Air Force procedures, as well as to provide additional understanding for our American counterparts of different ways to operate that cannot be found anywhere else in the Air Force,” said Persy. “There is also definitely invaluable camaraderie for inter-military relations.”

Persy is the sixth German pilot to participate in the C-17 Military Personnel Exchange program at JB Charleston since 2000.

“To me, the C-17 has been a completely new airframe,” said Persy. “It’s versatility in means of operational capability, air refueling, night vision goggles operation, low-level operation and assault landing zone operations are the most exciting aspects of flying the aircraft for me. I upgraded to instruction aircraft commander and it gave me the ability to train new C-17 pilots, as well as build my experience instructing U.S. Air Force pilots. It’s given me the chance to work alongside the American military and we’re able to learn from each other in the process.”

Foreign exchange pilots serve two to three year tours at JB Charleston. This gives them the chance to experience American culture and lifestyle with a taste of Charleston’s unique flair.

“Charleston’s weather, food and overall lifestyle are all extraordinary. I upgraded my home with a smoker and became a huge fan of shrimp and grits," said Persy. “The local community, from neighbors to my fellow Airmen, have also proven to be exceptional. It is inspirational to see the amount of patriotism in the U.S.; people stop to shake my hand and thank me for my service. I have never experienced that prior to my assignment here.”

“They might realize the German flag on my flight suit but I think they understand that both our militaries are united and share the same issues,” Persy added.

Each pilot is authorized to bring their family with them so they can be involved in the new experience.

“I brought my wife and two sons, age two and four, and they are having a blast,” said Persy. “Both kids are in preschool and are growing up speaking German and English which is a huge benefit for them and a once in a lifetime experience.” 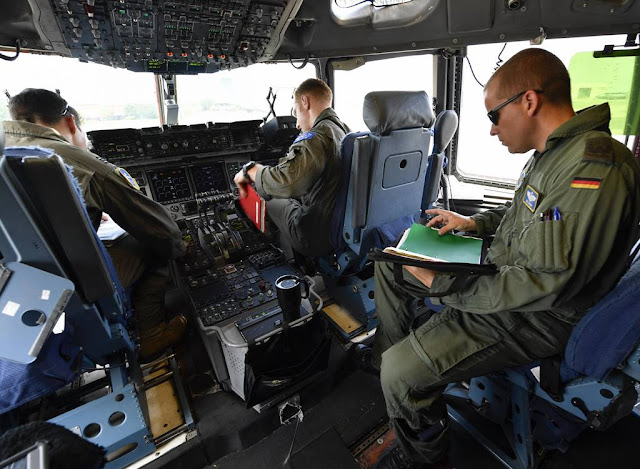 In addition to enhancing interoperability, the program gives the 437th AW pilots insight on tactics and experiences from experts in different aircraft, a benefit to both American and coalition partners.

“Having this program and these pilots is extremely valuable because they have the experience of flying in and out of Europe and Australia, including all the features that are not typical of flying just in the U.S.,” said Lt. Col. Adam Bingham, the 14th AS commander. “These guys are vastly competent, professional and I think it’s imperative to have this kind of exchange to remind us of how much our allies truly matter and how we appreciate and recognize their contributions.”