The Royal Air Force aircraft are continuing to take the fight to Daesh in Iraq and Syria.

The RAF is continuing to support Iraqi forces in their effort to liberate western Mosul. While the operating environment in the city is very challenging, particularly given the closely-packed buildings, very narrow streets, and the density of the urban population, our aircrew have continued to deliver precision strikes in close support of Iraqi troops on the ground. Daesh’s current tactics, including the illegal use of civilians as human shields, and fighting from sites such as schools, hospitals, religious sites and civilian neighbourhoods, increases the risk to innocent life. While no military operations come without risk, particularly in dense urban environments and against such inhuman Daesh tactics, the RAF continues to take all steps necessary to minimise civilian casualties.

Royal Air Force aircraft have continued to conduct intensive operations against Daesh, particularly in western Mosul and around Raqqa. On Wednesday 31 May, Typhoon FGR4s, armed with Paveway IV guided bombs, demolished a terrorist-held building to the west of Raqqa, whilst mixed formations of Tornado GR4s and Typhoons patrolled over Mosul, where they used two Brimstone missiles to engage Daesh positions which Iraqi security forces had encountered. The following day, three flights of Tornados and Typhoons struck a total of nine targets inside west Mosul; Brimstone missiles dealt with a heavy machine-gun and a mortar, whilst Paveway IVs silenced another mortar and hit five machine-gun positions and a sniper team.

A mixed Tornado and Typhoon pair used a Brimstone to destroy an armoured truck moving along a main road on the outskirts of Raqqa on Friday 2 June. Two other flights operated over Mosul, where attacks were delivered in very close support to the Iraqi forces, hitting eight Daesh positions with a mix of Brimstones and Paveway IVs. The targets included three machine-gun teams and three groups of terrorists armed with rocket-propelled grenades. In addition, a truck-bomb, concealed close to one of the positions, was also fortuitously detonated by one of the attacks. 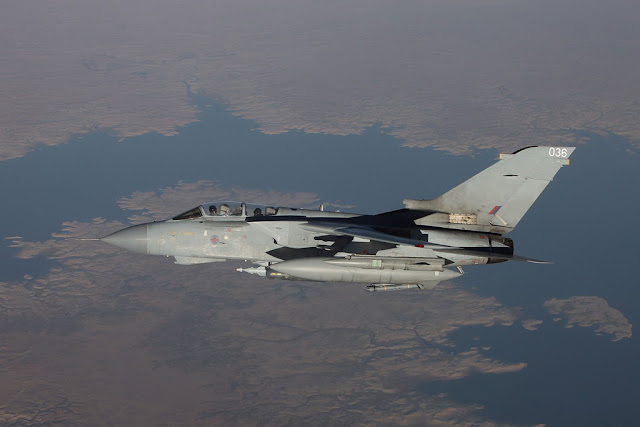 A Reaper, operating south of Al Qaim in western Iraq on Saturday 3 June, observed a group of dismounted terrorists, with an armed truck close by. One Hellfire missile killed several of the terrorists, a second destroyed the vehicle with a direct hit. West of Kirkuk, a pair of Tornados used a Paveway IV to destroy a Daesh strongpoint, whilst two mixed pairs of Tornados and Typhoons delivered five attacks in Mosul with four Brimstones and a Paveway against a truck-bomb, three sniper teams and a group with rocket-propelled grenades. A further mixed pair conducted three further attacks in Mosul on Sunday 4 June, using a Brimstone to deal with a sniper, and two Paveway IVs against a pair of Daesh-held buildings from which fire was being directed at Iraqi troops.

On Monday 5 June, two Typhoons, supporting Syrian Democratic Forces close to Raqqa, used a Paveway IV to strike a Daesh-held building in the east of the city itself. Tornados meanwhile continued operations over Mosul, and employed a pair of Brimstone missiles to deliver pinpoint attacks on two firing positions located in a large multi-storey building, where the terrorists had stationed a recoilless anti-tank gun and a machine-gun.