The full-scale aerial targets were requested by the Joint Operational Test Team to assist with test design development for upcoming operational testing of the F-35 JSF.

The QF-16 is a full-scale aerial target that has been modified to be flown with a pilot in the cockpit for training and also without a pilot as a target for live missile testing. The unique jets are from the 82nd Aerial Targets Squadron from Tyndall Air Force Base, Florida, and Holloman Air Force Base, New Mexico. The QF-16 drone took its first flight at USAF Holloman Air Base on Feb. 10, 2017 (Read the story).

The QF-16 is a fourth-generation fighter that maintains all inherent capabilities of the baseline F-16 Fighting Falcon including supersonic flight and 9-G maneuverability, according to the 82nd ATRS.

“We’re preparing for initial operational test and evaluation that starts next year,” said Matt Feringa, F-35 JOTT senior tactical systems analyst. “Part of the QF-16’s mission is to carry airborne radar jamming pods. We flew F-35s with them as part of our test design development and to preliminarily evaluate the F-35 against those jamming pods.”

The JOTT at Edwards is part of a joint enterprise that conducts operational test and evaluation of the F-35 Joint Strike Fighter. The unit consists of all U.S. services that will operate the different F-35 variants along with coalition partners such as the United Kingdom and the Netherlands who will also operate the JSF.

Feringa said the QF-16s were here for two weeks and the JOTT received good data to move ahead with their test plans. For the JOTT test purposes, the QF-16s were flown by pilots from the 82nd ATRS. 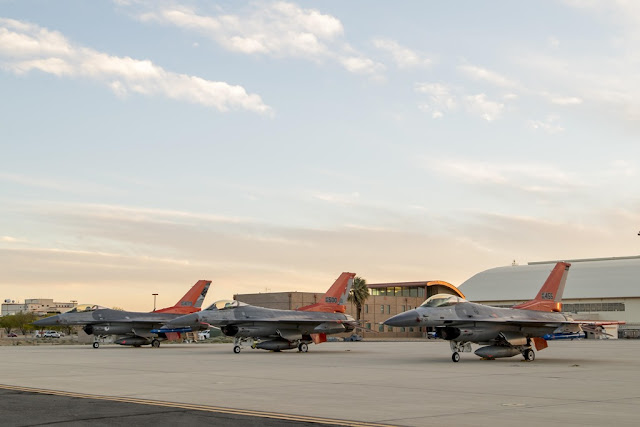 The QF-16 replaced the QF-4 Aerial Targets, which were converted F-4 Phantoms. The QF-4 flew its last unmanned mission Aug. 17, 2016 at Holloman AFB and was officially retired in December (Read the story).