In the first half of May, the Juniper Falcon trained Israeli and American aircrew members from the F-15 Division. Throughout two weeks of joint training, with the largest "Blue-Flag" training exercise in IAF history in the horizon, Israel and the U.S strengthened their strategic and tactical relationship.

The Juniper Falcon joint IAF & USAF training exercise, which trained the Israeli "Hammers", "Knights of the Twin Tail" and "Flying Dragon" Squadrons, came to an end last week. This deployment of U.S forces is of a strategic and tactical importance and its goals are mutual learning, strengthening the relationship between the forces, strengthening regional deterrence and preparation for the "Blue-Flag" exercise.

"Alongside cooperation on the diplomatic level, we learn from these exercises on the tactical level, and enrich both side's knowledge", explained Maj. Itamar, Head of the International Training Exercises Department in the Air Division. Maj. Itamar further explained that the exercise's leading Israeli squadron was chosen in accordance with the American squadron which was expected to arrive. "An Israeli squadron which operates a platform with similar capabilities to the foreign aircraft was chosen". Because the Juniper Falcon was an intimate exercise, the participants had the ability to focus on details.

Throughout the exercise, the participants faced multiple challenges such as a changing arena, various threats and the need to react as quickly as possible to any change in the field. "In the meetings that preceded the deployment each side presented the relevant threats to its country and the means at its disposal", described Maj. Ido, Deputy Commander of the "Hammers" Squadron, which operates the "Ra'am" (F-15I). "We created scenarios that promoted cooperation and fit both sides' training programs. We rehearsed sky defense under SAM (Surface-air-missile) threat and performed formation attacks in which each formation of four had its own mission". 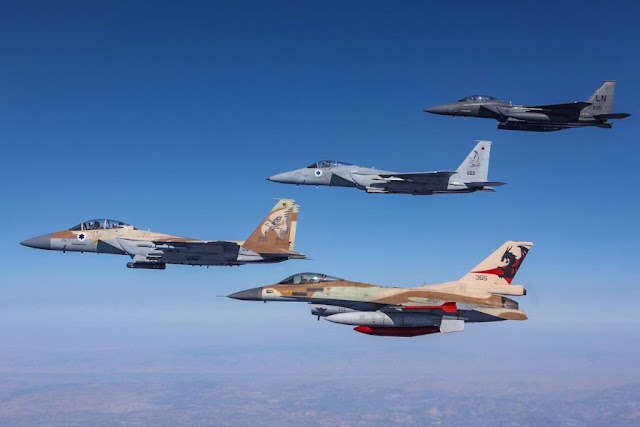 What about flight mentality? "The Americans have a slightly different culture. If we wouldn’t have been familiar with it, we could have been surprised in some cases", shared Lt. Amit Bar El, Commander of Ouvda AFB's Control Tower. With scenarios like this one and others in mind, an American aircrew member was positioned in the tower throughout the deployment.

The lingual gap, different debriefing technologies and a different number of participating aircraft, make debriefing as difficult as flying. "There are three stages to debriefing: what happened, why did it happened and how can we improve", explained Maj. Itamar. "In exercises with foreigners the 'what happened' stage is longer than usual and sometimes becomes the whole point. We lingered on the content of the exercise in order to draw the best conclusions possible".

The "Knights of the Twin Tail" Squadron, which operates the "Baz" (F-15) also participated in the exercise in order to study the nuances of hosting and flying with foreign forces. In the coming November, the squadron will lead the "Blue-Flag" International Joint Training Exercises, in which a number of foreign air force will deploy to Ouvda AFB. This deployment will be the biggest the IAF has led in the past decade.

"Throughout the exercise we were exposed to the world of debriefing, infrastructure and flight scenarios in foreign training exercise. The 'Juniper Falcon' exercise was a good rehearsal for flying in English", shared Lt. Col. Nadav, Commander of the "Knights of the Twin Tail" Squadron. "The language gap is our main challenge because we are flying in our home court, in contrast to the foreign force which needs to get used to a different environment, but the countries' different rules and the use of a second language create a challenge".