One-day experience at the flight school of Latina, Rome, to learn more about the early stages of student pilots.


Every year, in Italy, about 8,000 guys follow their dream of becoming a military pilot, but after hard selections, only 45 of them have access to the first phase of training which is carried out at 70th Wing of Latina, Italy.

During the studies which allows admission to the role of pilots, the 70th Wing provides to ascertain the attitude of flight and releases the Airplane Pilot License on Aermacchi T-260B.

Candidates come to the 70th Wing after passing the psycho-attitudinal training at the Air Force Academy in the penultimate stage of the selection. At the flight school, located in Latina, students face the ultimate test. They must pass the flying course that will allow them to get the coveted eagle.

Only in a second phase the young pilots will face the challenging training process to obtain the Military Pilot License. The process is divided into several stages: the 70th Wing leads the Phase 1 on T-260B aircraft. This phase has the purpose of consolidating the maneuvers previously learned and achieve an adequate mastery of the aircraft in the execution of aerobatic maneuvers, formation flying and management of simulated emergencies.

During my report I had the opportunity to experience what a candidate feels during his first flight at the 70th Wing. I took part in a training flight mission composed of three T-260B aircraft.

I have always been fascinated by the pre-operative phase such as dressing: the flight equipment room makes me feel part of the squadron. I wore a flight suit, helmet and the blue classic parachute, it is a standard for the T-260B aircraft that does not have the ejection seat.

I reached the assigned aircraft, the cockpit of the T-260B is very small (especially for a person of my height and not too tiny), but suited to the role of the aircraft.

While the pilot-instructor performed visual inspections of the aircraft, I started to check the points from which to take pictures: fortunately the large canopy offered to me good opportunities.

The ground crew pointed out to me several times the presence of the appropriate bag in case of vomiting, some students suffer from ketosis.

We were the first to take off, the engine was started and the pilot carried out the last checks by on-board instruments. We started towards the runwayk followed by the other two T-260Bs. 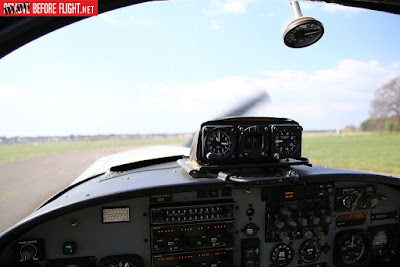 Pushed the engine, started the run! The aircraft immediately showed a considerable boost for its category and after a few hundred meters detached the wheels off the ground. We moved right away and then relocated to the runway so I could follow the take-off of the pair of aircraft from above. Everything was perfectly synchronized as well as the alignment of the three aircraft during the flight. 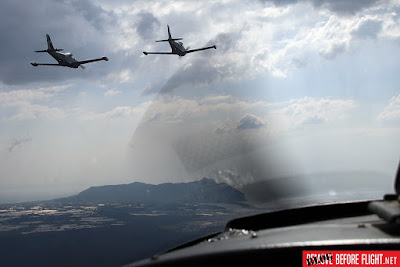 It was amazing to see how the distances between the planes were always so perfect, everything was handled by eye, without the aid of instrumentation. 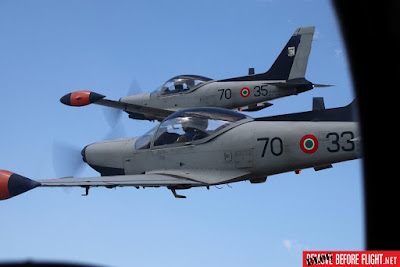 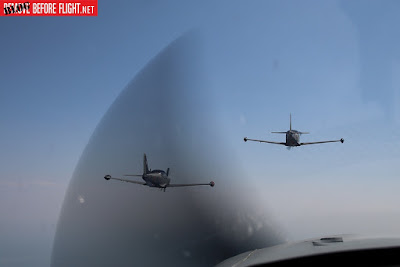 I kept taking pictures of the pair of aircraft while flying over the sea, everything seemed to go the best way; my problems started during aerobatic maneuvers. Nothing "excessive" compared to what students normally do during the exam, but my head began to become heavy and the stomach upside down because of turbulence. 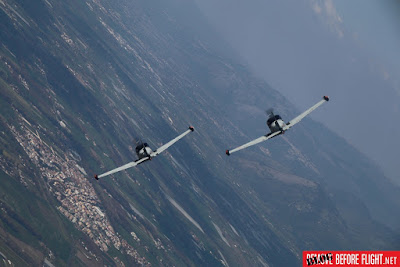 I admired the two aircraft ahead of us running some tonneau and intersections. I wanted to try these maneuvers, but I was worried I could not complete my service!

I was impressed by the performance of T-260B, a made-in-Italy jewel which is almost like some jet (apart the propeller engine). 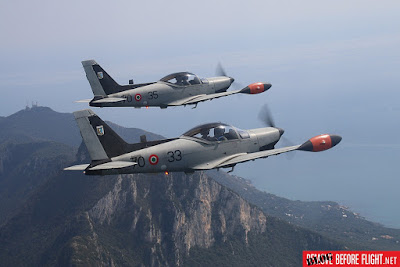 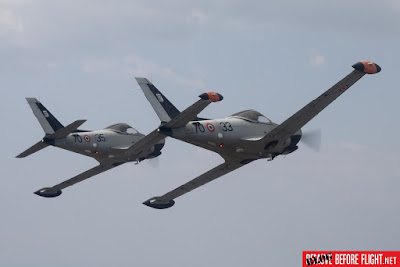 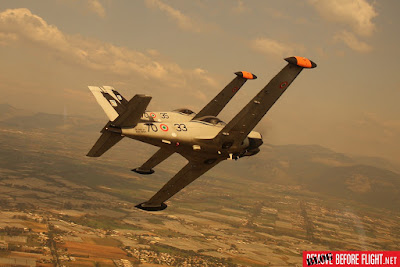 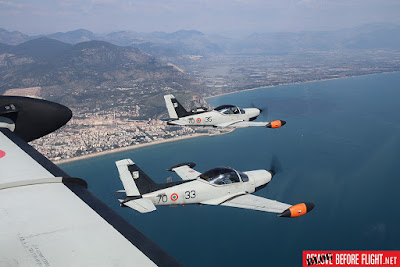 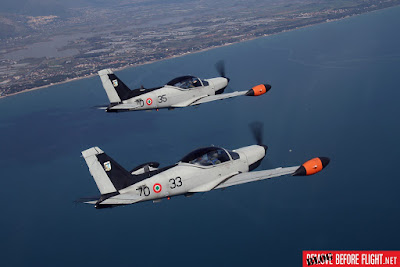 After about one flight hour it was time to go back: we followed the other two aircraft while running the approach to the runway to photograph the landing stages. Then it was our turn: we did a touch and go (I had always wanted to do it) and then landed.

My flying experience was completed. Flying with the T-260B made me part of a young pilot's training, but he also showed me the ability of Italian Air Force Instructors: their great skill in flying the aircraft puts everyone at ease.

I wish to thank the Italian Air Force Press Office, the Public Affairs Officer Lt. Paolo Pezone, the respective commanders of the 70th Wing and 207th Flight Sqn. and all flight and ground crews who assisted me during the reportage.