The United States fired Tomahawk missiles into Syria in retaliation for the regime of Bashar Assad using nerve agents to attack his own people.


April 6, 2017 - President Donald J. Trump ordered the attack on Al-Shayrat Air Base, the base from which the chemical attack on Syria’s Idlib province was launched.
The strike was conducted using Tomahawk Land Attack Missiles, or TLAMs, launched from the destroyers USS Porter and USS Ross in the eastern Mediterranean Sea, Davis said in his statement. A total of 59 TLAMs targeted aircraft, hardened aircraft shelters, petroleum and logistical storage, ammunition supply bunkers, air defense systems, and radars.

“As always,” Davis said, “the U.S. took extraordinary measures to avoid civilian casualties and to comply with the Law of Armed Conflict. Every precaution was taken to execute this strike with minimal risk to personnel at the airfield.” 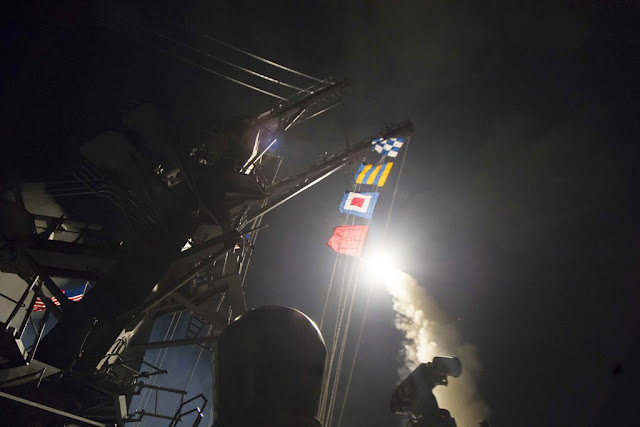 Russian forces were notified in advance of the strike using the established deconfliction line, Davis said, and U.S. military planners took precautions to minimize risk to Russian or Syrian personnel at the airfield.

“We are assessing the results of the strike,” Davis said. “Initial indications are that this strike has severely damaged or destroyed Syrian aircraft and support infrastructure and equipment at Shayrat Airfield, reducing the Syrian government's ability to deliver chemical weapons. The use of chemical weapons against innocent people will not be tolerated.”